Well, after a long delay and BeGeistert 021 among us, I suppose it’s time to tell my story about the Ohio LinuxFest (OLF).

My friend, Amir, and I set out to Columbus from Pittsburgh on the Friday evening before OLF, and as we traveled, I could already feel the excitement. Once settled at the Hyatt hotel, I scrambled a bit to build/install Haiku on my MSI Wind U100 netbook. I also let Amir try out a live CD on his laptop, and we shared some conversation about Haiku. He wanted to come to OLF mainly for the various talks, and naturally I was there to help man the Haiku table. As he slept, I eventually got my system set up as I liked it with a GCC4 hybrid trunk build (with additional apps/media), and then went to sleep for a couple of hours.

This was my first time being at the OLF, or any computer-related event for that matter, so I didn’t know what to expect. Upon meeting Darkwyrm and Mike after registration, I felt right at home and knew the day would go just fine.

Darkwyrm talking to an attendee

We met lots of people who were interested in Haiku. Some people knew of and used BeOS before, and even did a double-take while walking near our table. Others didn’t know anything about Haiku at all, and that meant we had to provide some history about BeOS/Haiku, and what Haiku’s goals/features/benefits are. Regardless of the audience, it was a joy to get to talk to people about Haiku and get a glimpse into their views on operating systems and software in general.

As Darkwyrm mentioned, we ran out of live CDs and the color fliers like they were going out of style. I’m sure this was partially due to Alpha 1 being released, but even random people who had no clue about Haiku or the alpha release were all interested in more information as they saw us demo Haiku to them.

I suppose one of the more interesting things for me was a visit from Michael K. Johnson and Elliot Peele from rPath. They shared with Mike and I about their Conary distributed package manager, which I found quite intriguing due to its elegant and intelligent approaches to package/file management. Michael did some quick testing on my netbook and found that porting Conary over to Haiku as-is would be trivial. [I discovered the same when I quickly did a dirty port of it soon after the OLF.] I think at the very least, Haiku can take some inspiration from Conary, as it is a fairly comprehensive solution to package/system management issues Haiku does face and will face in the future.

Also worth definite mention from the event is that Darkwyrm and I got asked by The Linux Link Tech Show (TLLTS) guys to do a future phone interview with them for an upcoming show. I will make that information available as soon as I know more. The TLLTS guys seemed really excited about what we’re doing, even though their show is primarily focused on Linux and related technologies, so I look forward to discussing with them further. 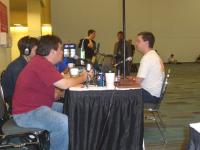 There wasn’t usually a lot of downtime at the event, but as the event was winding down for the day, traffic to our table naturally decreased. As such, Darkwyrm took advantage of the opportunity and went to an interview with the Northeast Ohio Open Source Society (NOOSS). From what I could overhear, it sounds like it was a good, informative interview. [I’m not sure if the audio will be made available, but if so, I’ll send a message to the Haiku mailing list, as well as mention it in the comments of this writeup.] After Darkwyrm was done, Mike and I interviewed as well, but since it was getting close to the time that the table breakdowns had to begin, we were the last people to talk with NOOSS before the afterparty (which I didn’t attend). Our interview was mostly silly and not much of anything to do with Haiku, but it was definitely still fun.

After the NOOSS interviews, it was time to pack up our belongings and leave. I said my goodbyes to Darkwyrm and Mike, then met up with Amir. We headed back to Pittsburgh, sharing our stories a great deal of the trip. All in all, it was a indeed a fun day for both of us.

I’d like to thank Koki, Urias, and all of the people involved with OLF that made Haiku’s presence at the event possible. I had a blast and am even considering going for all three days next time, instead of just the single Saturday session. A Birds of Feather (BoF) talk will be in order next time as well if I can manage to attend more than one day.