My Impressions from SCaLE 2010 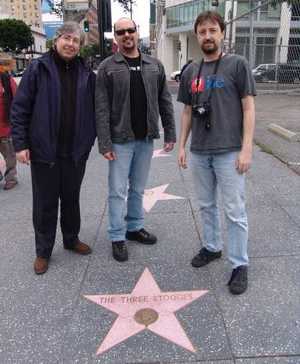 From right to left: Scott, Bruno and myself (the three Haiku stooges?) at the Hollywood Walk of Fame.

The Southern California Linux Expo – or the SCaLE show as it is also widely known – was the very first mainstream open source conference that Haiku exhibited at. This was back in February of 2007, when Michael Phipps, Axel Dorfler, Bruno G. Albuquerque and myself gathered in LA to show Haiku to the world for the first time (photos here). Following the once a year tradition that SCaLE has become since then, Bruno G. Albuquerque, Scott McCreary and myself gathered to represent Haiku at the SCaLE 2010 conference, recently held in Los Angeles on the weekend of February 20th and 21st.

On Saturday morning, the three of us gathered on the exhibit floor at around 9:00AM, one hour before the exhibition was scheduled to open to the public. This gave us plenty of time to prepare the booth, especially because we had already setup the projector screen on the backwall the evening before. We placed the HAIKU table runner over the 7 feet long table that we had at the booth, and then laid out – from left to right – Scott's AMD dual core laptop, my small cube-sized Intel dual core desktop hooked to a projector, and an 8-core laptop that belonged to Bruno's girlfriend. As handouts, we had the new Haiku flier as well as 50 alpha 1 CDs that Scott had burned on Lightscribe media.

In 2003 early, myself and a few Japanese BeOS fans founded the Japan BeOS Network, JPBE in short, a community based user group created mainly in response to the resurgence of BeOS in the form of the ZETA operating system (which was being developed by the German company yellowTAB). While the enthusiasm of the community built around ZETA, I felt it was important to educate the Japanese community about Haiku (then still called OpenBeOS); so I decided to do an interview of Michael Phipps, Haiku's project leader in those early days. I am posting this interview here for historical purposes, but also because I think it may be useful to familiarize newcomers with the history of the project and in some way as a tribute to all Michael gave to Haiku during his tenure. Enjoy!

What do You Know About the Haiku Logo?

I once had a personal blog where I wrote some stuff about Haiku. The blog is now gone, but I kept some of the posts that I thought could still be relevant or informative even afer time. Being that we have had many new comers as a result of the recent alpha release, I thought I would rehash some of these posts for both the newcomers as well as anyboby else who may have missed them in the past. This first one is about Haiku logo; I hope you enjoy it. 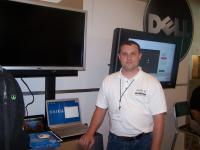 Urias at the Dell booth during OpenSource World.

It's been about a month since Urias, Scott and myself represented Haiku at the O'Reilly OSCON 2009 conference in San Jose, and approximately two weeks since we exhibited at the OpenSource World 2009 conference in San Francisco. I think this is the first time that we exhibit at not one but two events in a row, and we don't write any reports; and that is a real shame. So here I am, after some very serious procrastination, finally attempting to give a recount of both events in a single blog post. Like we say in Argentina, better late than never... :)

OSCON is an open source event organized by O'Reilly, a well-known company whose core business is to foster technological innovation by publishing books, holding conferences and providing online services. I had never been to OSCON before, so I did do some reading about it prior to applying for a booth earlier this year; beyond all the usual stuff (history, demographics, etc.) that I could find on their websites, what caught my eye was a statement about this year's OSCON, which I quote: "If the first ten years of OSCON were about opening the minds of big business to the philosophy of open source, are the next ten years about opening the minds of the open source community to the possibilities of its future?". Quite interesting articulation indeed, I thought, and one that raised my expectations for the event to a motivational level. I can say now that, luckily, those expectations were not only met, but even surpassed: OSCON 2009 was a real blast, the kind that you don't ever want to miss again.

As some of you may have noticed under the Upcoming Haiku Events box on the front page, Haiku is making its debut at the upcoming O'Reilly Open Source Conference this week. Also known as OSCON 2009, this conference will be held at the San Jose McEnery Convention Center (Google map) from July 20th through the 24th. Haiku will be exhibiting along many other Open Source orgs on July 22 and 23; our booth number is 14; to locate us in the exhibit hall, check out the floor plan (138KB PDF).

During the two days of the OSCON exhibits, Scott McCreary, Urias McCullough, and myself plan to demo the latest nightly builds of Haiku, introduce newcomers to our project and operating system, and ask answer (duh!) any questions that visitors may have about Haiku. For demo purposes, we have prepared a cube-style desktop PC that will be hooked to a projector (similar setup from the SCaLE 2009 conference), an Acer Aspire One netbook and a possible an additional laptop computer. We will also have Haiku flyers at hand.

This is a sample of the CSS styles taken from the extraordinary work done by Humdinger on the Haiku User Guide. I am showcasing these here because I would like to use them throughout haiku-os.org as well. If it turns out that there is no unsurmountable opposition to adopting these classes, I will eventually document them so that they can be used by those submitting news, blogs posts and documents to haiku-os.org.

This is just a very unthreatening little note. Don't be upset.
This may have serious consequences. Don't mess this up.
By golly, you better be sure what you're doing! Danger, Will Robinson!
koki's blog Read More 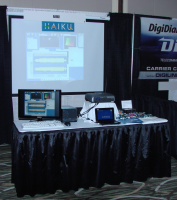 After a long week of chronic procrastination, here is finally my report from the recent SCaLE conference. The 7th Southern California Linux  Expo, familiarly known as SCaLE 7x, was held at the Westin Hotel Los Angeles Airport Hotel on February 20th through the 22nd, and Haiku had its booth for the third year in a row. SCaLE is a bit special for me, as it was the first show that I did for Haiku (back in 2007) and because that's where Haiku made its debut at a big open source conference; I personally view this first appearance combined with the now renowned Haiku Tech Talk that we gave at the Google Mountain View offices soon after (Google video available here) as a sort of turning point for a project coming out of obscurity and starting to make it in front of the eyes of the world. Melancholic aspects aside, SCaLE is a popular open source event that combines abundant and rich speaker tracks with an exhibit floor that has a healthy mix of open source projects and businesses, so it is a great place to raise awareness and promote the project among a small but well qualified audience of mainly geeks and business people both involved in open source.

Haiku made its "big stage" debut at LinuxWorld for the first time this year. If you follow the feeds on our website, you have probably already read the nice reports that Urias posted on the website during and after the show (day 0, day 1, day 2 and day 3). I thought I would give me own personal recount of the event, in order to perhaps bring a little bit of a different perspective, and hopefully also complement what Urias has already written about the show.

I had never been to LinuxWorld before, but I knew from reading about the conference that it was bigger to other open sources conferences we have exhibited in the past. I also had an idea of the demographics of the event, as I had done a little bit of reasearch before proposing our attendance last year. Average attendance was said to be more than 10,000 people, and by the size of the exhibit floor at the Moscone Convention Center in San Francisco and the duration of the show (three full days), this seemed just about right; this was obviously a very compelling number from the point of view of getting exposure for Haiku.

Code_Swarm for Haiku videoToday I received an email from Fredrik Holmqvist (TQH, of Bezilla fame) about a video that he recently created and posted on Vimeo. Titled “Code_Swarm for Haiku,” this is a video generated using Code_Swarm, a technology that allow visualizing the activity on a software repository. The video that TQH created was generated from the Haiku subversion commit messages, and shows the period starting from the time Haiku moved to Subversion up until revision 26538.

It's been approximately 24 hours since we started the Haiku Code Drive 2008, so I thought I would give a quick update on where we stand right now, and also take the opportunity to share with you a few observations based on some of the feedback that we have received so far. I want to start by saying that the response so far from the community has been great. We are exploring somewhat unknown waters with the Haiku Code Drive, so there was a degree of uncertainty as to how the community would respond. This is why it is so rewarding to see the great outpour of generous donations that we have already received in just one day. Contributions are coming in from all over, including Canada, Finland, France, Germany, Hungary, Poland, Russia, Switzerland, the US and many other countries. We have started a list of donors in the donation page, so check it out (to be updated daily).

I am keeping an eye on the contributions, and as I write this I can see we are already at about half of what we need to sponsor one student; we are currently at approximately $1,300.00, but the total changes so fast, that it is hard to keep up! This is absolutely awesome, but it's only the beginning. Remember, this is your program: you fund it, you choose who to sponsor. If you have not yet made your pledge to the cause, please head over to the donation page and show us your love for Haiku. This is your opportunity to make a difference, so don't miss it! :)