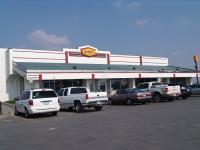 On the way to LA, we had breakfast at a Dennys "in the middle of nowhere"We left my house in Tracy at around 10:00AM. The drive from Tracy to LA was about 320 miles long, so we calculated about 4-5 hours to get to the SCaLE venue. We made a stop for a quick lunch at a Denny's restaurant around midway, and finally arrived at the Westin hotel around 4:30PM; we could have made it a lot earlier, had it not been for the bad traffic as we approached the LA metropolitan area. After checkin, we settled into our respective rooms, and then headed over to get our badges. Soon after, we went to take a look at the exhibit area, as we wanted to see how we could attach the projector screen to the backwall of the booth. It turned out to be very easy: a couple of plastic straps were more than enough to securely attach the screen to the top horizontal bar of the backwall. That evening we were both quite tired, and decided to call it a day quite early, so that we could be in good shape for the next day.

Bruno and I met for breakfast at around 8:00AM, and around 9:00 we headed over to the exhibit with all our gear to start the booth setup, soon after which we were joined by Joe Bushong. I really thought I had brought everything we needed this time, but as usual, at least one piece is always missing. As Bruno and I were walking the exhibit floor towards our booth, I suddenly realized that we had not brought a power tap. One of the good thing about open source events is that solidarity abounds, and soon we had not one but two power taps that were offered to us by two different people. The first thing we did was hook the projector to my cube machine, and make adjustments so that we could get the biggest image possible in the right position of the screen. The booth came with a network connection, so we hooked all our laptops and the cube to our little switch in order to gain net access. We also placed the nicely ironed and folded Haiku shirts on one end of the table, as well as a box full of hand-made Haiku-themed bookmarks which my wife made and donated to the cause.

The exhibits opened at 10:00AM, and while the first hour or so was somewhat slow, traffic picked up considerably later on. I must say -- and I know I may be repeating myself -- that SCaLE is a great place to be for Haiku; the audience is heavily technical and quite geeky, which makes it ideal for the target that we have at this stage of the project. We did get the the occasional end user question from time to time, and we but for the most part I think we were at the right place, as also confirmed by the post-show response (more on that later).

The day went by pretty quickly. We had people at our booth most of the time, sometimes more than we could handle. There was a good number of people that had seen us at SCaLE 2007, who were quite pleased to see the considerable and tangible progress that Haiku had made in the last year. Joe and I did a lot of demoing, and Bruno addressed those who were more technically intrigued by Haiku. We handed out a lot of flyers, and also made sure to invite people to attend Bruno's Haiku presentation later that day.

Haiku: An Open Source OS Designed for the Desktop, by Bruno G. Albuquerque 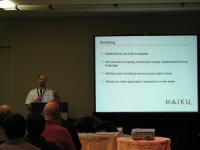 Bruno G. Albuquerque during his Haiku talk at SCaLE 6x.Bruno was a featured speaker at this year's SCaLE. This was the first time Haiku received a speaker spot at any open source event, so we were very excited, and perhaps a bit anxious too to see how it would turn out. The Haiku flyers that we handed out at the booth on Saturday had information about Bruno's talk, and we made a conscious effort to make people aware of the presentation whenever we could; it seems that the effort paid off. I was not able to see the first part of the presentation, as I had to stay at the booth; but when I went to the conference room where Bruno was giving his talk about halfway, I was thrilled to see an almost full room (I counted approximately 40 people). Bruno got so excited with his talk, that he went slightly overtime in the Q&A session, and had to be reminded that his time was up. :) All in all, a great way to wrap up a very good first day for Haiku at SCaLE.

We had a slower start on Sunday. Bruno and I met for breakfast at around 9:00AM, and we only headed to the booth a bit past 9:30. I actually took some time to walk around the other exhibits. I had a nice chat with the Drupal folks, who gave me some useful advise on the upgrade that we are currently planning for the website. I also stopped by the booth of MindTouch, where I was introduced to the new open source wiki called Deki Wiki that this company develops. I thought Deki Wiki was interesting, so if you are into wikis, you can check out some demo videos they have here. I also stopped by the TheLinuxFund.org booth, and that of the Software Freedom Law Center to see if there were any possibilities that they could help Haiku Inc. in any way. 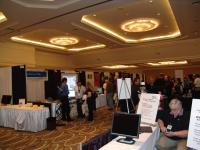 View of the exhibit hall (Haiku booth, second from the left).Sometime in the afternoon, as I was standing on front of the boot, I was approached by Klaaty and Gort from thebadapples.info for an audio interview for a podcast. I immediately suggested that he interview Bruno instead (as I supposed he would be more interested in the technical stuff), and that's what he did. I did not listen to the interview while it was being done, but I just received an email from Klaatu saying that the interview turned out to be great, and that the podcast would be online sometime tomorrow. I will post the link at the end of this post when I have a URL.

A few days before the show, SCaLE offered some BoF open spots for Sunday evening (after the exhibit close) to those who wanted them. Although we knew we could not expect much of an audience so late on Sunday (most people leave by then), we thought it would be better than nothing and grabbed one 7:00PM spot. Bruno, Joe and I kept joking during the day that it was going to be just the three of us during the BoF, and we were not that far off. As it turned out, we had six people attend the BoF, and while the audience was small, the BoF was very rich in technical content and quite intense in terms of audience participation. We were all so engaged into the discussion, that we all forgot the time, only to be reminded by Haiku that it was time to go: the screen suddenly went blank, and while I was trying to figure out why, I realized that I had not plugged in the power of the laptop. It was kind of a funny way to wrap up what ended up being a very interactive and productive BoF.

All in all, I think SCaLE was great. This conference has the right size (as in, it's not overwhelmingly big), the right balance of open source and business, and a great audience for Haiku as an open source project. From the point of view of the impact that our presence at SCaLE made, I think we were successful by any measure. Not only did we get post-show coverage at Ars Technica, Slashdot and Endgadget.com and even on MacUser.com, but we have also been contacted after the show by people from the ACPICA project at Intel, the Internet Systems Consortium, a technical writer (that works for Oracle) who would like to offer his time and skills to write Haiku documentation, a French journalist who wants to do a scoop on Haiku for a major IT-related news site. We even received a query of someone asking how much we would sell the rights to Haiku Inc. for (no kidding!). We are slowly but meticulously following up on all the inquiries, so that the effort does not go in vain.

Finally, I want to dedicate some space in this writeup to Joe Bushong. Joe is a Haiku enthusiast local to the Los Angeles area who he has been very supportive of our effort at SCaLE, both in 2007 and this year. Not only did he make himself available for the whole weekend, but he did so with great enthusiasm and dedication. Joe helped out at every stage of the event, becoming a great asset to this effort. And his always positive attitude makes it a pleasure to hang out together. Please join me in thanking Joe for his support, without which our presence at SCaLE would have been much more difficult and probably not as effective. Thank you Joe and hope to see you next year!

Update: I forgot to mention that we sold eight Haiku T-shirts (when everyone was giving them away), and raised the incredible amount of $182 to contribute to the cause. Thanks for reminding me Joe!