On Saturday morning I woke up at around 7:00AM (much earlier than my usual, I must say), as I wanted to be on the exhibit floor at around the time they opened it for booth setup (which was from 8:00AM). Scott, who was driving in from Marine County (north of the Golden Gate bridge), called me around at 8:00 to tell me that he was on his way. We eventually met directly at the Haiku booth on the exhibit floor a bit before 8:30, and started setting up our gear. I had brought with me my laptop, an HP Pavilion zv5400 w/1GB RAM and an AMD/64 Athlon (that insists on running at only 800MHz in Haiku), which we hooked up to a projector. Scott brought a small form factor Dell desktop computer with a 2GHz Intel processor and 256MB of RAM, which we hooked up to a 17 inch LCD screen. Both computers were then connected to a Buffalo WLI-TX4-G54HP wifi-ethernet adaptor, which I had already configured to use the free access point available for the exhibitors. Additionally, we set on the table Haiku handout flyers, as well as a donation box (we received the amazing amount of $26 in donations!!). No t-shirts this time, as selling stuff was not allowed this time. 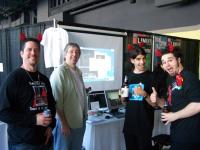 Having a chat with the FreeBSD/KDE guys

The site opened to the public at 10:00AM, but there were not that many people coming in until a bit later in the morning. Our booth was located all the way in the back of the exhibit floor, right in front of the main stage. Next to us was Linux Pro magazine, and we had Ubuntu, FreeBSD, KDE and O'Reilly in the same area. There were a couple of known faces, btw; a young couple that had attended the Linux Picnic last August and who "starred" in our FalterCon video of that event were at the KDE booth across the aisle.

Next to them was FreeBSD, which interestingly had a full size backwall with a KDE desktop printed on it showing, among other things, an IRC session (in Kopete) where a noob asked "what is FreeBSD" and freebsdgirl replied "FreeBSD is a superior server operating system..." (leaving out the rest on purpose). I thought this was quite telling of the real focus of the BSDs, as reading this commentary about the recent annual Linux Foundation Collaboration Summit brought the same kind of thoughts about Linux on the desktop. I somehow feel that our focus on personal computing still gives us, even after all this time, an edge over the other open source operating systems, as our decisions cannot be influenced or compromised nor our goals can be changed by any server oriented agenda. Anyway, I am getting a bit off-topic here. :) 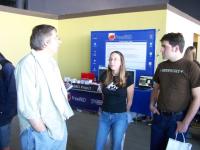 Talking with the owners of a BeBox

Traffic picked up quite a bit towards noon and during the rest of the afternoon. Scott and I repeated our quick show-and-tell introduction to Haiku, and the occasional more in depth demo to those who were interested enough to spend 5-10 minutes at the booth. As usual, live queries still rank high in the demos that draw the most "oh, that's cool!" comments, but some were also positively surprised to see applications like Firefox and VLC running in Haiku as well. A few of the visitors to our booth were very familiar with BeOS, including one person who had actually done development in BeOS in the past; we were also visited by a young couple who not only were very familiar with BeOS and Haiku, but also the proud owners of a BeBox. :) Interestingly, this was the first time, after representing Haiku at several conferences over the past year or so (mostly in the US, one in Japan), that I got the dreaded "why don't you just help with Linux instead?" question. I tried to explain the guy, but he was obviously not interested at all, and simply walked away before I could finish my first sentence. Oh well... :/

As the first day came to a conclusion, at around 6:00PM, we packed all our booth gear and went back to the hotel to rest for a while before dinner. Scott and I reunited at the lobby at around 7:30PM, and decided to have dinner at the Italian restaurant located in the same building as the hotel. The food was good, and we had an interesting conversation with a couple sitting next to us; she was from Honduras, he was from El Salvador), so the conversation was half in English, half in Spanish. After dinner, we headed back to the Metreon, as Google was holding a free bar gathering for all LugRadio Live speakers/exhibitors at Jillian's. Scott and I spent some time with Gareth from SCaLE, who told us a great story of how SCaLE had become the successful event that it is today (my favorite open source event, by the way; they have the right balance of community and business, and it's extremely well organized). We also met with Kyle of the NBLUG, and this brings me to my next point: networking.

As I had mentioned earlier, LugRadio turned out to be a good place for networking with various interesting people. For instance, on Friday evening I met with Leslie Hawthorn, the person at Google who pretty much runs the Google Summer of Code; not only did I introduce myself, but I also told her how great their program was, and what a great job she did; hopefully that will get us an extra student slot (just kidding). ;) On Saturday morning, David Maxwell of Coverity came to our booth; David was specifically interested in adding Haiku to their impressive list of projects that support the Coverity code analisys tool (follow up here). Perhaps in a strike of good luck, the booth next to ours was occupied by Linux Pro magazine which, as it turned out, was "manned" (so to speak) by Managing Editor Rikki Kite; being marketing communications my field, I did not miss the chance and spoke with her about pursuing a full an article about Haiku in their magazine, to which she was receptive. I got her contact information and now need to follow up; we'll see how this pans out. During the Saturday night gathering at Jillian's, Scott introduced me to Kyle Rankin from the North Bay Linux Users Group (NBLUG); this user group meets regularly at O'Reilly Media's headquarters in Sebastopol, Marin County (north of San Francisco), and they invite speakers to talk about various topics. We proposed Kyle the idea of giving a talk about Haiku at one of their meetings, and he liked it; so we are going to plan for a Haiku presentation on either their June or July meeting. Last but not least, I had a nice chat with Marsee from O'Reilly; as some of you may already know, O'Reilly organizes many open source conferences in the US (including, for instance, RailsConf). One of the biggest (if not the biggest) conferences organized by O'Reilly is OSCON, which is scheduled to be held on July 21 - 25 in Portland, Oregon. I have already followed up with a colleague of Marsee at O'Reilly, and if we can get a group of 2-3 people to help out, we will apply for a Haiku booth at OSCON; if you are interested in attending or helping out, please see related invitation here or contact me directly.

Sunday had a very slow start. Scott and I came to the exhibit floor at around 9:15 for booth setup and were ready to roll before open time (it's easier when you already know where everything goes). However, not that many people showed up until almost noon. I took the opportunity to walk around and check out some of the other booths, and gather handouts from here and there (mostly live CDs, and a couple of toys for my granddaughter). Scott went to see a couple of talks while I stayed at the booth. Later in the day, I had one special mission left for that afternoon: I knew David "Lefty" Schlesinger, Director of Open Source Technologies at ACCESS Co., was giving a talk at LugRadio, and I wanted to meet him in person. David helped us get the BeBook and the Be Newsletters released, so I wanted to thank him personally for his support and hand him a Haiku t-shirt as a small token of our appreciation. I finally located David at around 3:30PM close to the stage where he was going to give his talk later that day, and he is now another proud owner of a Haiku t-shirt. :)

On a side note, one of the sponsors of LugRadio Live, Dice.com, was giving away four ASUS eeePC computers during the event (two per day). In the hope that I could get lucky and get one of this nice UMPCs for Haiku, I entered the draw by writing my name and email address on the back of the drink tickets that were being handed out. Unfortunately, luck was not on my side this time, so it looks like we will have to look elsewhere. We really should contact ASUS and see if they are willing to donate a couple of eeePCs for Axel and Francois to get Haiku running on them.

This event is supposed to be centered around the theme a LugRadio, a radio show (podcast) that "takes a relaxed, humorous look at Linux and open source" (copy and paste from the LugRadio website). So while still open source related, this event had a slightly different flavor from, say, SCaLE or other open source conferences that I have been to in the past. Having a Haiku booth was definitely worthwhile, but I did come out with the impression that, at least from the standpoint of having exhibits, two days was a bit overkill for the not so impressive amount of people that walked the exhibit floor (particularly on Sunday). Of course, as those of us in the business of exhibiting at shows usually say, "it only takes one" (good new customer) to justify the effort and investment. In the end, I think that we contributed to the goal of raising awareness of the project and educating people about Haiku; I also think that with our presence we also helped put a face and give a human touch to the project, which I believe is important as well. Add to that the opportunities to connect with various people in the open source scene and beyond, and I would say with confidence that attending LugRadio was definitely a positive experience for Haiku.

In closing this informal report, I would really like to give special thanks to Scott for dedicating the whole weekend to Haiku. To be honest, I would not have done this without his commitment and help. Moreover, Scott was generous enough to donate to Haiku the Dell PC that he brought with him. Maybe it's time that I design and put together a Haiku show box. Thanks Scott!

Photos, videos and other miscellaneous