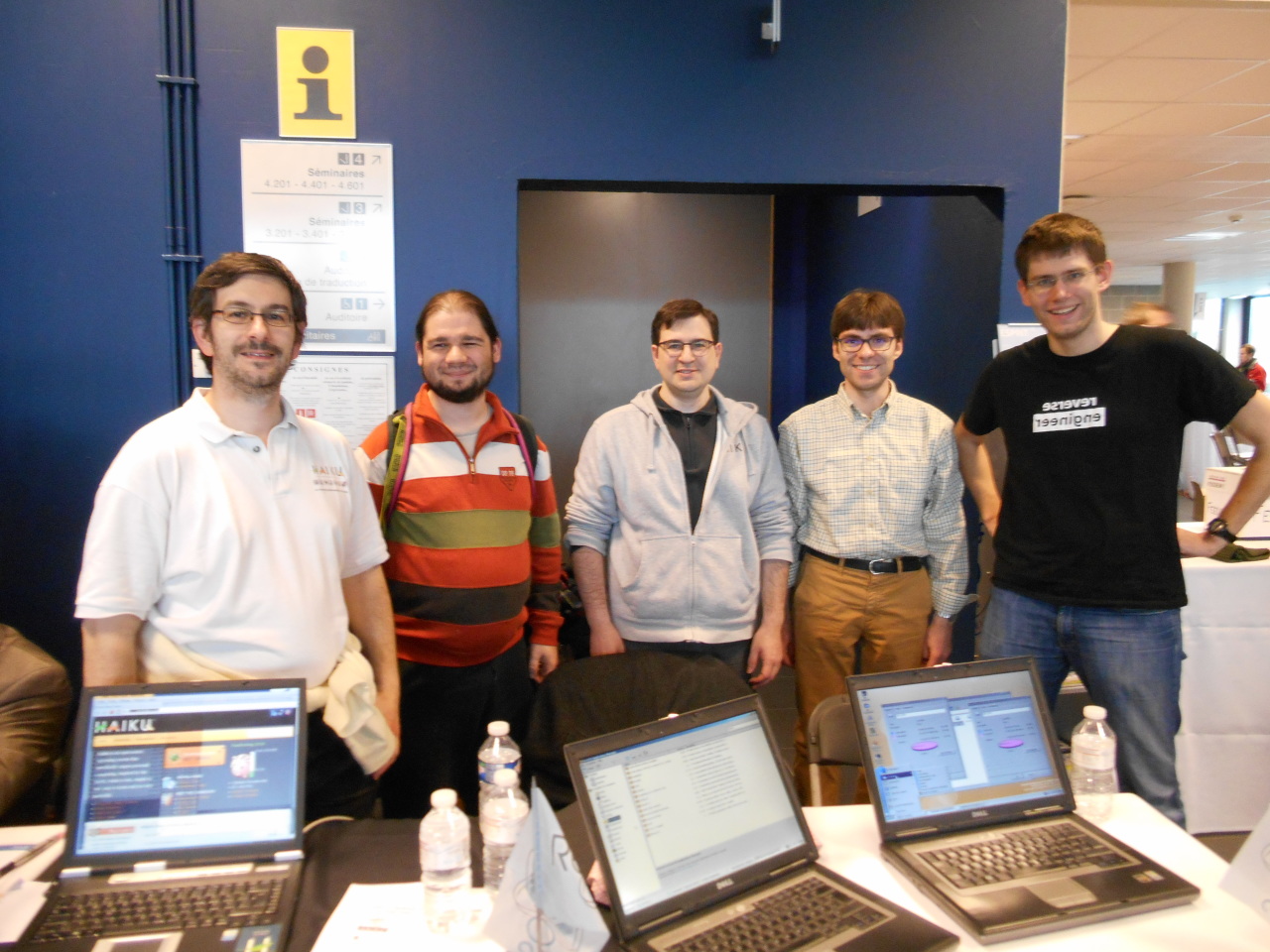 So, I just arrived from Brussels back home. One more FOSDEM done. As always it was action-packed, and I couldn’t clone myself enough times to see everything. The fact that we had the booth and that 3 out of the 4 talks I proposed were accepted probably didn’t help.

Luckily this time we were three to handle the half-booth, as both Olivier and Adrien made it with me, because yes, we shared the table with ReactOS this time, to increase the chances of being picked up.

The trip went without trouble, except I only slept like two hours and had to wake up at 5am, and I was still recovering from a flu, but you know, devotion. ;-) I arrived on Friday, and quickly found the hotel, took lunch and a well needed nap. I woke up too late to attend any of the outside events I was aware of, so can’t tell much about those. I also finished my slides, although they were already quite done in the train. 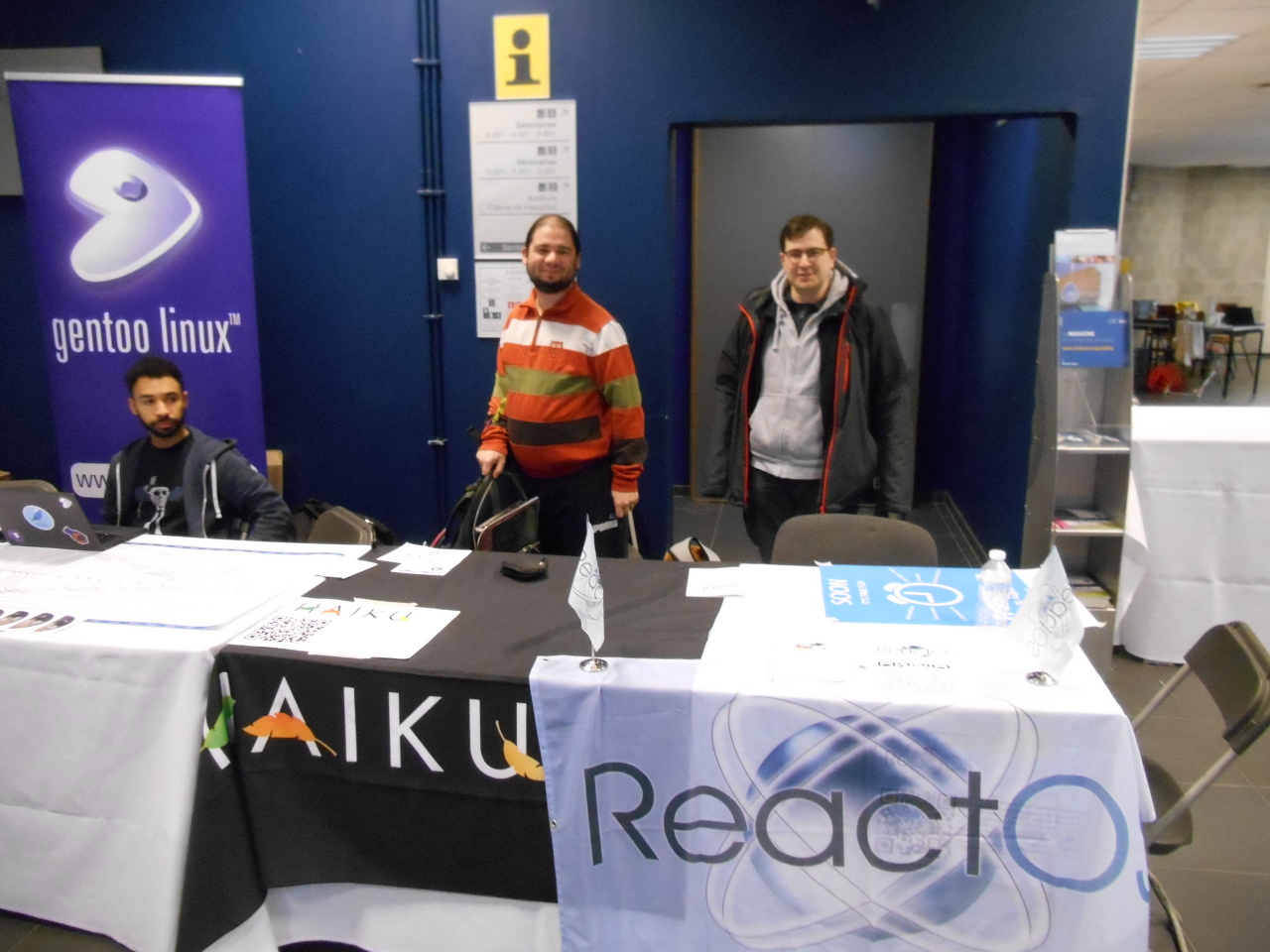 On Saturday we set up the booth with Olivier, after he spent 30 minutes finding a place to park the car, and we started chatting with our two ReactOS dev neighbours. Adrien soon joined us from Toulouse, so the team was complete. We pondered about printing a banner saying “We are NOT GNU/Linux distros” but we weren’t allowed to tape anything on the wall. Someone did a short audio interview of all the stands, including ours. We also had quite many people passing by, as we were located just next to the infodesk in the K building, where all the GNU/Linux distros are, so the place was crowded. Some people did ask us for the toilets though. :D

In the evening all five went to a Belgo-greek restaurant to discuss the projects further more.

On Sunday we woke up earlier as we had to check out of the hotel, and I had my three talks starting at 10:45. At least it was easier to park the car this time.

I went to see the first talk of the Decentralized Internet devroom by Tristan Nitot (ex-Mozilla, now at Cozy), but then I went to get accustomed to the Desktop devroom. One of the talks I wanted to see there was cancelled, it was about alternative graphics servers on Linux, and I wanted to thank them for helping make GNU/Linux software more portable to Haiku by removing X11 dependencies…

I started by talking about retro desktops in the Desktop devroom, and the room was almost full. Then I talked about Haiku, and I believe most people stayed. I had some interesting questions for both talks, but then I had to rush to another building for the third one. The Python devroom was in an amphitheater, and I had even more people watching me talking about Weboob, I’m not used to it… The videos for the talks are starting to become available, the talk pages should link them automatically when they are.

Then I took some much needed lunch. I checked the foodtrucks but they were quite busy, so I went for a sandwich at the caferaria. On my way out I saw Amaelle Guiton, a french journalist, on her first FOSDEM. She wrote a nice article about it in French (guess who’s on the photo). At FOSDEM, even lunch is an opportunity to discuss with people you met at other conferences.

I also tried to go back to the Decentralized Internet devroom but it was full. Apparently it was full the hole day, so the topic got attention. I also wanted to meet with people organizing the next RMLL/LSM (Libre Software Meeting) in Saint Etienne, but it seems we missed each other. I also passed by other booths, and said hello to Stephanie, Josh and Jeremy from the Google OpenSource team (yeah, you know, GCI and GSoC).

Besides my own blue beret from the 2008 RMLL, I saw other people wearing berets, and some people wore even stranger hats, specially the VLC folks with their cone-heads…

I passed by more booths in other buildings. There were some funky things, like a system to detect failed street lights when passing under with a car from Automotive Grade Linux, and BBC’s micro:bit, a new microcontroller board to help kids learn coding and electronics. Back to our booth for some more discussions about Haiku, about applications, and driver support…

Then it was already time to tear down the tables, and I joined the ReactOS devs in the shuttle to the train station, although mine was a bit later.

I wasn’t sure I would be able to find someone to drive me from the TGV station, because, well, “Valence”-TGV is actually 15km away from the town called Valence, it’s just in the middle of nowhere, and of course there aren’t any shuttles after 11pm. But after begging some friends on twitter I finally found a lift.

I wish I was in a better shape so I could have seen more people and more talks, but it was still enjoyable to talk to many folks at the booth either remembering BeOS fondly or thinking about testing Haiku again after some years to see how the package management works.

And now we need to prepare for the JDLL in April, then the RMLL/LSM (Libre Software Meeting) this summer.