getting to the kernel, 68k way

Someday I should write about the start of the 68k port, there is plenty to talk about… Today^Wnight^Wmornin erh, hmm well, now, I’ll try to do a live report on the issue I left you with last time: getting the kernel to load correctly.

I’ve been getting further recently on the 68k port, as you may know already everything now compiles but the kernel is still largely stubbed, misses drivers, and the bootloader doesn’t load it yet. I’ve almost finished mmu setup, at least for the 040 ARAnyM emulates.

Been quite busy those days, but I wouldn’t forget to report the remaining days at RMLL… more people, talks, and RMS of course!

Hi there. Just some quickies on the RMLL, we have so much to do here ;)

The return of the son of the demo CD


As everyone knows (or should), every BeOS install CD was actually a live CD (way before Linux “invented” it…). And of course so would be for Haiku.

While it used to work long ago, nobody actually tried to make one for some time, and some fixes were required to make it happen again. Making an usable CD still requires some work (Bootscript.cd, ramdisk for settings maybe…), but it finally boots again.

Here are some screenshots of what I fixed at FOSDEM…

Hi there from our FOSDEM booth in the corridor! 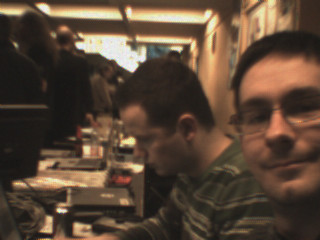 What to do when you are bored at 1 am, and you see noone sending in new themes ? Make sure you can use more of the existing ones :) I’ve never used BeTheme myself, but it seemed to have gained some fans. So hoping it would bring newer ideas I added some code to the Theme manager to import those themes. It currently supports background pictures, deskbar position and R5 decor.

The bowels of the Theme Manager, or How to make Haiku as ugly as Zeta

Some people might wonder what exactly this “themes” stuff in the commits is all about. So let’s see how it all started, where we are and what’s left to do. Features The Theme Manager is an addon-based desktop theme selector. It can selectively apply parts of a theme, create a new one based on the current configuration, add a screenshot to it. Currently, themes contain settings for ui colors, system fonts, background pictures, window decorator, deskbar position, screensaver, Terminal colors, font and size, sounds, and even the selected winamp skin from CL-Amp and SoundPlay through a specific plugin.