Rust on Haiku: the Case of the Disappearing Deceased Threads

Summer! The time to slow down, relax, go to strange places, and do the projects that are long overdue. This summer I had the joy of spending my time in a lovely house near Lyon in France. In many ways the summer was like others, meaning there was plenty of wine and a lot of relaxing activities. At the same time, the Covid situation did give me a lot of reasons to scale back exploratory activities at the tourist hot spots, and instead focus on activities close to home. I decided to seize the opportunity and to see if I could dive into one of my long-standing pet peeves in the Haiku ecosystem.

For a long time I have been maintaining the build of the Rust compiler and development tools on Haiku. For this purpose, I maintain a separate tree with the Rust source, with some patches and specific build instructions. My ultimate end goal is to have Rust build on Haiku from the original source, without any specific patches or workarounds. Instead we are in the situation where we cannot build rust on Haiku itself (instead we need to cross-compile it), and we need a customization to be able to run the Rust compiler (rustc) and package manager (cargo) on Haiku. This summer my goal would be to find out the underlying issue, and fix it so that the patch will no longer be necessary in the future. Let’s go!

The issue first appeared when trying to use rustc and cargo from Rust 1.21.1 to compile packages. One of the tests I always do to see whether a generated Rust works, is to compile cargo itself. And the 1.21.0 version of cargo just failed. In particular, it failed with the following error:

Looking at the source, it seems to fail because of an error when the Rust library calls the pthread_join() function in Haiku’s libraries. The entire method for std::sys::unix::thread::Thread::join()is:

It seems like the issue is that pthread_join() fails. The error code corresponds to B_BAD_THREAD_ID. This leads to the question: why does it fail? I mean, we spawned (or: created) the threads, so why would they disappear?

The initial impulse for determining what happened is to determine what has changed from the standard library code in Rust 1.20.0 to make it behave this way? Let’s compare to the previous version of this function:

It is not that the previous version worked differently, but it is that the error was only checked if the library was built in debug mode. Apparently the developers were confident enough that their library implementation was sound, so that they put this check in their production code. And since the binaries of cargo and rustc that I distribute are built in production mode, this means that on Haiku this error suddenly surfaced! It is very likely that pthread_join() has always ended with errors, it is just the case that now this leads to an end in the execution of the program because of the unconditional assert!.

In other words, the issue seems to be an interplay between the thing you are trying to do with cargo, Cargo’s use of Rust’s standard library, and the system.

The issue seems to be in how cargo and/or the Rust standard library are using the threading system. As a quick catchup: threads are a technique for applications to execute code separately or independently from other parts of the program. It is often used to split up CPU intensive work, to take advantage of multiple cores. Rust uses the standardized Posix Threads API (known as pthreads) to create and manage threads. Haiku has its own threading API, but it does support (a subset of) pthreads.

When a developer spawns threads, they may or may not care about the outcome of the thread. Let’s say we have a tool that processes a file on the file system, and compares it against something on the network, we may want to get the network file in a separate thread, so that we can continue processing the file while the (slower) network operation is underway. In that case, I would spawn a thread using pthread_spawn() (let’s call it network-thread), continue with the processing of the file in the main-thread, and afterwards use the result to compare. That means that after I am done in the main-thread , I will use pthread_join() to join with the other thread. If the network-thread is already finished, the call will return and I know I can use the result. If the network-thread is still busy, the main-thread will be blocked on pthread_join() until it is finished.

An alternative scenario is where a developer spawns a thread, but then does not care about its outcome. In that scenario they would call pthread_detach(), which tells the OS that the program does not care about the outcome and that it should not put any effort into tracking ended threads.

In the way the Rust standard library uses the threads, they are not detached in any way. This means that pthread_join() should work! In other words, the issue seems to be that the system is forgetting about certain threads that were created.

Reproducing the Problem in Cargo

The first step to fixing the issue is to find a way to reproduce it, preferably reliably and consistently. For me, reliably means being able to reproduce the problem using a set of predefined steps. Reproducing it consistently means finding a fixed list of steps that will trigger the issue.

The first step then, was to create a build of Rust and its tools without the workaround, so that the error could occur. I used this custom build to then reproduce the issue.

On the face of it, the issue was not that easy to catch. For example, it did not happen on every rust crate that you were trying to build. Some crates, like socket2 and libgit2-sys would just succeed. Building cargo itself would trigger the issue, but only if it would build from scratch. That means that if I build the crate, and it fails with the error, re-running cargo would succeed. It would only fail again after cleaning out build artifacts.

In order to find out more about what exactly leads to the failure, I decided to rerun the command with the RUST_BACKTRACE=full environment variable, in order to use Rust’s internal stack trace mechanism. That lead to the following result: 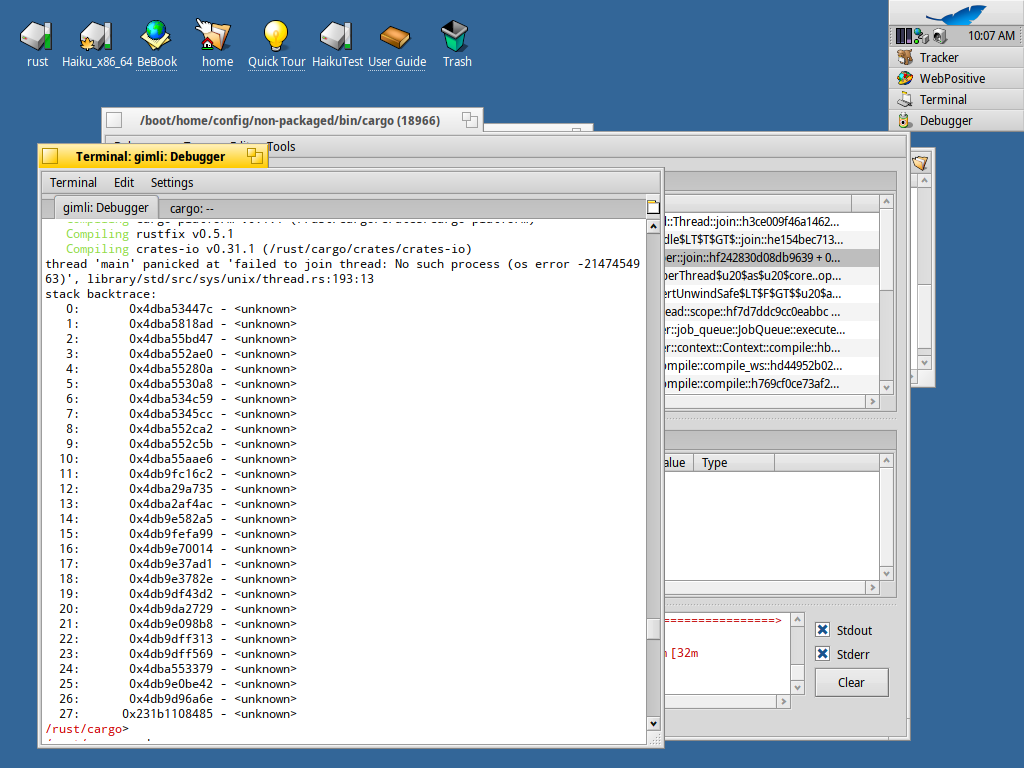 Unfortunately, it is not very useful and has been broken for a while. Let’s see if our friend Debugger can help us get a stack trace. 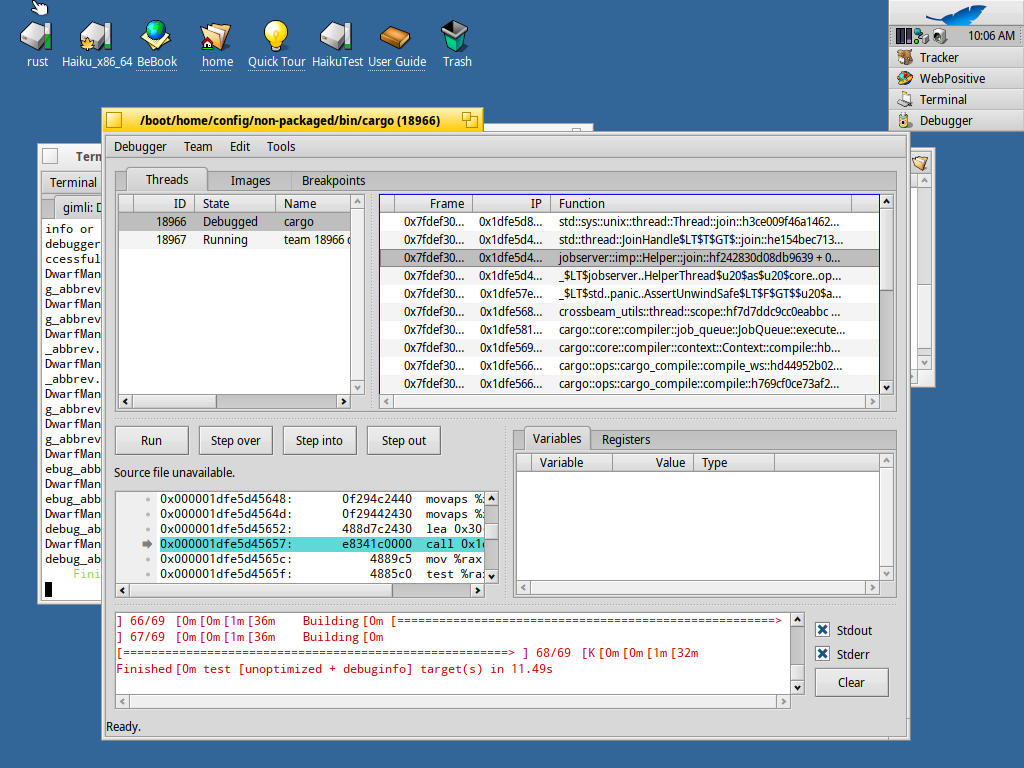 This gives us a more useful stack trace. The issue seems to be in threads that were created (and then joined) by the jobserver crate. This crate implements a method pioneered by make to allow a “form of parallelism limiting across process boundaries”. I added more debug output to the code, and I found that for each crate that cargo has to build, it spawns a helper thread. Then at the end of the build process, cargo would try to join all the helper threads, failing on the first helper thread that was joined.

Now that we sort of have the rough outline, it would be helpful to narrow down the issue and to try to write a manual test that consistently and reliably fails in the same way. The reason is that it is reasonably easy to reproduce the issue with cargo, but that application itself does a lot of complex operations that obfuscate the issue at hand and might even make you go down rabbit holes.

In the initial simplest version we just spawn one thread and join it in later. This should not fail (applications on Haiku spawn threads all the time so any issues with this should be apparent. The source:

Even running it a multiple of 10,000 times does not break. So let’s see what happens if we spawn multiple threads within the same team.

I created a second version and I made some changes:

On a Rust build with the workaround, this worked fine, but the issue did occur in the custom unpatched Rust build! That’s good, it seems like we are on to something.

Down in the kernel

If the thread cannot be found on either of those lists, then the error will be B_BAD_THREAD_ID. And that’s the familiar error with which this all started. Now from debugging cargo, I knew that the threads that we were joining were no longer alive, so it is worth investigating how threads end up on this dead list. There is actually a kernel function named thread_exit()(source) that does the cleanup when a thread ends, including adding things to the dead list.

Now this is where things get interesting. My eye immediately was drawn to this MAX_DEAD_THREADS, because if the number of dead threads in a team would be higher than this number, a thread would be thrown out of the dead list meaning that pthread_join() would no longer be able to find it! The constant itself could be found in the private header thread_types.h:

After seeing this line, a long and loud ‘Gotcha!’ could be heard over the countryside in the Rhône-et-Loire province. Changing the test to lower the number of threads to 32 no longer created an error, and after I tweaked the Haiku kernel to allow for a higher limit of dead threads, all the previously failing tests and compiling Cargo worked!

The final step of my summer bug hunt was to get the actual solution in the Haiku repository. After a short discussion on the mailing list, I proposed a change which was accepted after some tweaks. The Haiku kernel now no longer has a limit on the number of dead threads. There is an implicit trade-off here: the previous version uses a soft limit to impact the potential misuse of a developer that creates a lot of threads, but that never cleans it up. After discussing the downside to this, we decided that there are plenty of other ways to break a user’s system, and misusing or abusing the threading system is very low down the list of things that might break a system.

The fix has landed in hrev54540, meaning that every Haiku build after that revision, the Rust standard library will no longer need the workaround. Having said that, the binaries I am building will probably keep the workaround until Haiku Beta 3 is released.

And with that, the summer is over!

Things along the way

Some final notes, as one might wonder why it took me two weeks to actually find and fix the issue. During work I ran into a few mishaps along the way, that I patched or sent in patches for: