Just posting a very brief entry to let you all know what’s up with HPET support in Haiku. So far, I’ve been able to mostly separate all the x86 timers into individual (but still statically linked into the kernel) modules, and have them used based on priority. Currently, they break booting on my system (qemu works, though, with the ISA timer). Brief TODO (in no particular order): Modify how each arch advertises which timers it supports Migrate the other arch timers into modules (low priority, since the other architectures are not fully supported, I believe) Move priority & init code into the generic section, out of x86 (this can only be done when all other archs are migrated) Implement HPET support (currently stubbed out, but the module is there.

It's been approximately 24 hours since we started the Haiku Code Drive 2008, so I thought I would give a quick update on where we stand right now, and also take the opportunity to share with you a few observations based on some of the feedback that we have received so far. I want to start by saying that the response so far from the community has been great. We are exploring somewhat unknown waters with the Haiku Code Drive, so there was a degree of uncertainty as to how the community would respond. This is why it is so rewarding to see the great outpour of generous donations that we have already received in just one day. Contributions are coming in from all over, including Canada, Finland, France, Germany, Hungary, Poland, Russia, Switzerland, the US and many other countries. We have started a list of donors in the donation page, so check it out (to be updated daily).

I am keeping an eye on the contributions, and as I write this I can see we are already at about half of what we need to sponsor one student; we are currently at approximately $1,300.00, but the total changes so fast, that it is hard to keep up! This is absolutely awesome, but it's only the beginning. Remember, this is your program: you fund it, you choose who to sponsor. If you have not yet made your pledge to the cause, please head over to the donation page and show us your love for Haiku. This is your opportunity to make a difference, so don't miss it! :)

Hello Everybody! My name is Andrej Spielmann and I am the GSoC student who will be implementing anti-aliasing based on LCD sub-pixels to Haiku’s graphics engine (App server, Painter, etc.). Stephan Assmus is going to be my mentor on this project and Oliver Ruiz Dorantes seems to be my backup mentor and an eager investigator to the Slovak language and cuisine :-) A short introduction of myself: I was born in Slovakia (Bratislava) and I still live there during vacations.

Hello, Everybody! I’m Dustin, the student in the 2008 Summer of Code who is going to implement support for system timers other than the TSC in Haiku. I’ve been actively tracking (and trying to involve myself in) Haiku’s development for a few months now, but have been passively watching it since Be, Inc. went under and OpenBeOS sprang to life. In that time, I’ve gained a basic understanding of the Be/Haiku API, and of limited parts of the Haiku kernel.

Back in the 90s, BeOS had many very faithful followers in Japan, both end users and developers. You can still see on the web photos of how people lined up late at night to get their hands on BeOS 4.5J released by PlatHome, the BeOS distributor in Japan (more pics here). Japanese developers also contributed a good amount of software for BeOS back in those days, some of which has made it into the Haiku code base (ie., the Canna Japanese input method, the MuTerm terminal on which the Haiku terminal is based, etc.). The Konatsu font used in Haiku to display Japanese is also an original creation by Masuda Mitiya, originally designed specifically for BeOS. Sadly but understandably, not many of these former BeOS fans remain active today; in fact, only very very few.

I was one of the founding members of the Japan BeOS Network user group (JPBE.net) in Japan, which we created in 2003 mainly in response to the appearance of ZETA. Back in those days, when Haiku was still at a too early stage to have any appeal, ZETA gave the JPBE.net members hope that BeOS could survive and even evolve. As time went by, our hope gradually changed into to the realization that ZETA was not what we thought it would be, and that realization eventually changed into the final disapointment brought by the sad unraveling of ZETA and yellowTAB. The end was particularly nasty in Japan, where the ZETA distributor sold the shipped product but never had the decency to pay royalties to yellowTAB. Not that this was the direct and only cause of yellowTAB's demise, but in the eyes of Japanese users, this did add a large dose of extra drama to how ZETA went down in history, making the disapointment even greater. The "ok, I've had enough; I am moving on" feeling was quite prevalent.

Hi everyone! I am the GSoc student to implement the swap file support. Haven’t been here for a long time since I spent a week prepareing for the school’s exam. The annoying exam ended yesterday, and now I have time to make some preparations for this summer. I have got a basic unstanding of the Haiku vm system during the application period. In the next few days, I will investigate how paging is implemented in Linux and FreeBSD (I’ve stated doing that but was interrupted by the exam)and continue to work on my haiku vm tutorial.

This summer I’ll be attempting to enable Zeroconf support in Haiku. For those of you who may not be aware, Zeroconf enables Zero Configuration Networking, and it is aimed at simplifying the creation of small networks: no DHCP server, no pre-determined IP addresses, no need to know what host name your printer is on! How is this achieved? There are three components to it: Addressing: handled by IPv4 Link Local Addressing Naming: handled by multicast DNS Service Discovery: also handled by multicast DNS This project will have two main components:

I would like to announce the availability of the git revision control system. The git website describes it as:

Git is an open source version control system designed to handle very large projects with speed and efficiency, but just as well suited for small personal repositories; it is especially popular in the open source community, serving as a development platform for projects like the Linux Kernel, WINE or X.org.

Git falls in the category of distributed source code management tools, similar to e.g. Mercurial or Bazaar. Every Git working directory is a full-fledged repository with complete history and full revision tracking capabilities, not dependent on network access or a central server. Still, Git stays extremely fast and space efficient.

This document describes how to install the git binary, and how to get the source. 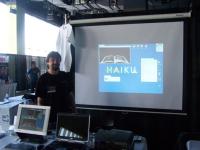 Scott at the Haiku booth

I spent this past weekend in San Francisco in order to attend the LugRadio Live USA 2008 event. Together with Scott McCreary (of BeDrivers.com fame), we organized a Haiku booth to represent the project at this the first LugRadio Live event to be held in the US. This event was a bit of a mystery to me, in the sense that I did not know what to expect. It certainly turned out to be an interesting and fruitful experience, not only because of the usual increased visibility that results from having a booth at any open source event, but also because it gave us the chance to get to know and network with quite a few interesting individuals.

I drove into San Francisco on Friday afternoon, as I wanted to check out the exhibit floor at the Metreon and also see if I could setup our projector screen in our booth in advance. We were originally told that there would be a "no hanging stuff from the wall" policy, but it turned out that it was OK for us to hang the projector screen from the tube holding the backwall drapes behind our booth. And that's exactly what I did: with the kind help of one of the on-site crew and a couple of plastic cable straps that I had brought in my show box, I had the screen setup in no time. I spoke with the on-site staff about wireless access, and got all the info that I needed to get my ethernet-wifi adaptor working, so that we could have internet access from Haiku. Once I had the plan for the next day more or less clear in my head, I called it a day, and went back to my hotel room to relax until dinner time.