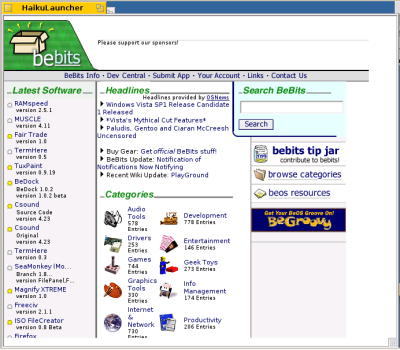 Webkit rendering bebits.comIt looks like the Haiku Webkit port initiated by Ryan Leavengood has entered a productive second stage of development, and thanks to the recent work by one of the new project team members, Andrea "xeD" Anzani, tangible progress has been made as shown by the recent screenshot showing the HaikuLauncher application rendering bebits.com (shown to the right). I was curious about his work, so I went directly to the source and asked a few questions to Andrea; here are his answers.

Andrea: From the questions you wrote, it looks like you think we have a working browser here. Well, we don't. I'm sorry to tell you but what you see it's just a proof that the webkit is working. Still incomplete and with a lot of bugs. The webkit is, in short words, a framework for loading, parsing and drawing an html page (including net connections and javascript interpreter). We are working on fixing and finishing it. When we are done with porting the webkit, then we can speak about the development of a web browser.

The WebKit Haiku port team has seen some nice progress lately in the form of our first decent rendering. Read more to see it... 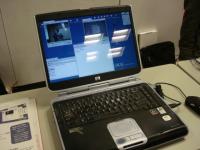 Demo machine at KOF Haiku boothNot surprisingly, it took me much longer than originally planned to find the time to write about the second day at the Kansai Open Source Forum conference (KOF). But no worries: memories are still quite fresh, as it's usually the case when things go well and you have fun. The second KOF day started earlier, especially for me. The exhibits were scheduled to open at 10:00AM, so with Momoziro we decided to meet at the hotel lobby at around 9:00AM. But I was up way before that, at around 5:30AM (compliments of my very jet-lagged old body). So I sat in front of my laptop to write some emails and then went through my Haiku presentation slides again, making little changes here and there, changing the order of a few slides and even adding a couple of slides based on some of the questions that I had received during the first day at KOF.

This past Friday and Saturday I attended the Kansai Open Source Forum (KOF) conference in Osaka, Japan, to represent the Haiku project together with my Japanese friend and BeOS/Haiku developers Momoziro-san. Here are my impressions from the first day at KOF.

ATC complex in Osaka, where the KOF conference was held.

KOF was held at the Asian Trade Center (ATC), located in the waterfront area known as the Osaka Bay Area. ATC is a huge complex of which the KOF exhibit area was only a very small part; the complex has a lot of stores and space for various types of events that are held on a regular basis. Ironically, the KOF exhibit floor was on an area of ATC called the MARE Gallery; I say ironically, because as some may know, Mare is my last name. That and the fact that Japan is like my second home (I lived there for about 23 years) kind of made me feel welcome. ;)

A few hours ago I had my Haiku talk on the Dutch Open Source event T-DOSE, and I'm still glowing all over. The attendence was above all my expectations, around 25 people were in the room. And despite of the last minute all night changes I had to make, the speech went fluently. Someone made a few pictures, which I hope to be able to post soon, and more importantly, I'm on tv!

Excuse me for the brevity of the previous post, it was done on my mobile phone (per experiment), and thus I was limited in the amount of characters I could post. I just returned from Eindhoven (which, by the way, is the most ugly city in the Netherlands), and all in all I had a fun day. I went to see two talks: one on KDE 4 programming by Adriaan de Groot.

I just arrived at the event location. My first impression: a highly geek audience. So I might have to change the tone of my speech. The venue is okay, and The rooms are enormous. I have no idea how many people are going to be present when I speak tomorrow morning. The time is 11 am by the way, gmt 1, and there is a webcast. Check www.t-dose.org. I'm now going to see some talks, to see what kind of audience I might expect.

You are probably aware of the existance of chkbfs. This tool checks the file system for errors, and corrects them, if possible. Nothing is perfect, so you might not even be asking yourself why a journaling file system comes with such a tool. In fact, it wasn't originally included or planned in the first releases of the new BFS file system. It was added because there is a real need for this tool and you are advised to run it after having experienced some BeOS crashes.

What A Long Strange Trip It's Been

I love Haiku. That probably doesn't surprise anyone. I am phenomenally proud of the progress, both past and present that the project has made. I have lead the project since its creation, including running each of the WalterCon events, doing a great deal of public speaking, starting the non-profit, writing around 100 articles and editorials for the newsletter, fielding hundreds of emails, random phone calls and occasionally even writing some code. I have received a job offer because of Haiku and gotten back in touch with a number of old friends as a result of the publicity that Haiku (and, indirectly, I) has received. I have had the honor of meeting a bunch of the former Be crew and seeing the doubt and question fade as they saw what we had created. I had the distinct honor of being introduced by JLG.