The end of GSoC is in less than two weeks now, so it's time to clean things up and get what I started working. I spent the previous week reading ICU documentation to understand how it worked, and this week I used this information to build the locale preflet. This is not as simple as it looks. First, I had no experience of programming with the Interface kit so I had to learn how things worked. 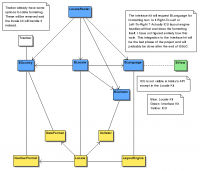 almost-UML diagram of the locale kit This week, I finally got the plaintext catalog add on working. Then today, Oliver reviewed my work and we had a meeting on IRC. We agreed on some changes to the internal architecture of the locale kit, and also to the classes I added. Some classes in this kit have unappropriate names, and the kit was designed with zeta compatibility in mind, whereas in today’s Be-World it seems more important to focus on gettext.

Mid-term evaluations for GSoC are already coming… I’m still working on the catalogs for translating applications. I got the system working and integrated it into Haiku, so now any application can be translated. However, there is still a lot of work to do. I’m now working on a plaintext catalog add on. Catalogs are the files that store translated strings. There is a catalog add-on called “default” that is used in applications.

Locale Kit: everything about catalogs and catalog add ons

Today I have started to write a catalog add-on to save catalogs in plain text for easy translation. I’ve spent some time looking at the involved C++ classes, and here is what I found. A catalog is a collection of strings, stored as <hash,value> pairs. It is used in the locale kit to translate the text in an application to the system language at runtime. When an application starts, it asks the locale roster to find its catalog and return it back.

These two weeks I’ve been quite busy with other things, so the project didn’t move as much as I wanted. However, I managed to get the catalog engine to internationalize an app for the first time. It’s not a big application, just a very simple Hello World test program. And the lack of a tool for translating catalogs means I had to edit them by hand to get the translation done.

Hello world ! As you know, I am one of the selected students for this year summer of code. In this post I will introduce myself and give some details about my project. My name is Adrien Destugues, some of you may know me as PulkoMandy as i’ve been lurking on the irc channel and mailing lists for some time. I already applied for the Summer of Code and Haiku Code Drive last year but unfortunately I was not selected.