How to Write a Printer Driver

A print job is a file, generated by a printing application using the Interface Kit class BPrintJob (see Figure 1). This file contains archived BPicture objects — one for each call made to BPrintJob::DrawView(). A raster printer driver, for example, can use the BPicture objects for each page and draw them into a BBitmap object and convert the pixels in the BBitmap object into the format the printer understands. The driver can make changes to the content of the BPicture, including dithering and color correction. There is no standard or common code for these features in R5.

When a printer driver is requested to print a print job it uses a transport add-on to transfer data to the printer. Transport add-ons know how to write to an individual device (parallel, USB, network, etc.) Separating transports from drivers allows R5 to work with, for example, a printer on a USB port or the same printer on a parallel port with only one driver. It also makes writing the drivers simpler: the driver outputs a "stream" of data, without having to know how it is delivered. 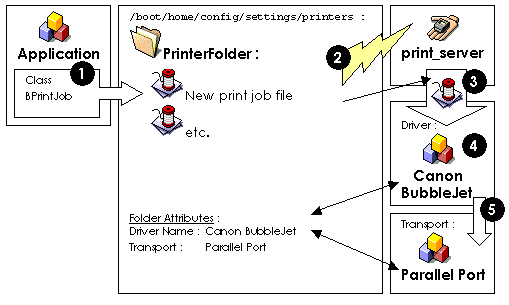 Transport add-ons (like Print To File, Parallel Port, and USB Port) are located in a folder named transport inside of the system or user printer driver folder.

The Life of a Printer Driver

To install a printer driver, the driver has to be moved into one of the printer driver folders. Printer drivers should not link to shared libraries other than those provided by the OS — third-party libraries should be statically linked instead. This helps to avoid version conflicts.

Users add a new printer to the system using the Printers preflet. They select a printer name, printer type, and transport add-on. The preference application creates a spool folder with the name of the printer in B_USER_PRINTERS_DIRECTORY (i.e., /boot/home/config/settings/printers). The name of the transport add-on is stored in the spool folder's file attribute named transport. The type code of this attribute is B_STRING_TYPE.

When an application calls BPrintJob::ConfigPage(), the print_server requests that the printer driver configure the page by calling:

The printer server calls this function with spool_folder, a pointer to a BNode object whose path is the spool folder, so the printer driver can access its attributes. It also passes settings, a pointer to a BMessage object that contains the previous page settings, if any. At the very least, the page size and orientation have to be specified.

The printer driver usually opens a window to let the user select the page size, orientation, and (optionally) other settings; these other settings may be printer specific. The mandatory fields are:

If the configuration was successful, a new BMessage object with the settings is returned. If it fails, NULL has to be returned (e.g. in response to the user clicking the Cancel button in the page setup window).

The main purpose of the configuration of the print job is to let the user select the range of pages to be printed and the number of copies of each page that should be printed. Again, printer-driver-specific settings can be added.

The print_server calls this function with the same parameters as it does when configuring the page:

Settings contains the fields from page configuration, which should not be changed. The mandatory fields that have to be added or changed are:

On success, a new BMessage object with the settings should be returned; otherwise NULL has to be returned.

init_transport() is passed a BMessage object with a field printer_file of type B_STRING_TYPE containing the path to the spool folder. On success it returns a BDataIO object and NULL on failure. The BDataIO object can be used to write data to the printer.

The printer driver must not delete the BDataIO object. Instead it has to call exit_transport() and then unload the transport add-on.

Now we come to the core of a printer driver. This is the prototype of the function that is called by the print_server when the print job is ready to be processed:

The print job can be read using the file print_job. Its file format is explained below. Again the attributes of the spool folder can be accessed using spool_folder and the settings from the page configuration are also available, e.g. to get the page size.

To write data to the printer, the printer driver has to load the transport add-on and create a BDataIO object as explained in the section entitled Using a Transport Add-on.

With the Printers preference application a printer can be removed. This deletes the printer folder from B_USER_PRINTERS_DIRECTORY if no pending print jobs exist.

Usually if a new version of a printer driver should be installed it is not necessary to remove the added printers from the system. In most cases it is sufficient to replace the printer driver add-on.

Issues to Consider When Writing a (Printer Driver) Add-On