The second beta for Haiku R1 marks twenty months of hard work to improve Haiku’s hardware support and its overall stability. Since Beta 1, there have been 101 contributors with over 2800 code commits in total. More than 900 bugs and enhancement tickets have been resolved for this release.

To download Haiku or learn how to upgrade from R1/beta1, see “Get Haiku!”. For press inquiries, see “Press contact”.

This release is available on the x86 32-bit platform, as well as the x86_64 platform. Note that BeOS R5 compatibility is only provided on the 32-bit images.

SSE2 support is required to use the WebPositive web browser. On machines where this is not available, it is recommended to install the NetSurf browser instead.

Begun but significantly incomplete at the time of Beta 1, this release sees a significant advancement in support for HiDPI monitors (and UI scaling in general.) Unlike other operating systems which largely enact a “device pixel ratio”, that converts a number of “internal pixels” to “screen pixels”, Haiku instead scales everything based on font size, and leaves pixels to mean “screen pixels” in isolation. This also means that one can effectively change the UI size and scale on any display by changing the system font size, and everything else should adjust to match it.

There are still some bugs to be ironed out (such as scrollbars not drawing with proper scaling applied, as seen in this screenshot), but things are now generally usable under HiDPI. Other applications, such as Deskbar and Tracker, saw significant improvements to their behavior on HiDPI, as well.

The Deskbar has had various improvements. It now has a mini-mode, where the icons on the shelf expand leftwards. You can activate it by dragging the shelf space by the right handle onto the blue leaf.

New mini-mode to put the Deskbar at the top of the screen.

Additionally, the “auto-raise” mode has been improved to automatically lower the Deskbar when the mouse leaves it.

The Mouse, Keyboard, Touchpad and Joystick preferences have been consolidated into one Input preferences panel. 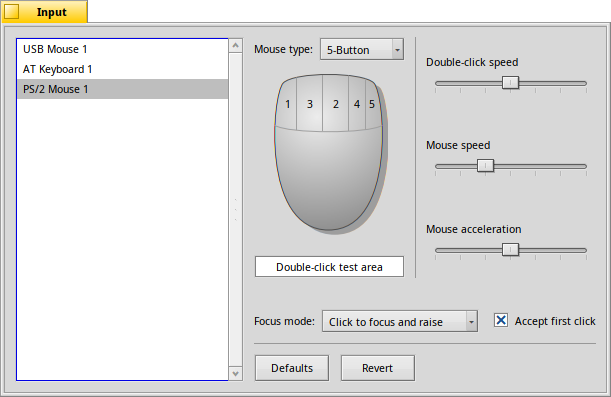 The consolidated Input preferences, including support for mice with 5 buttons.

Additionally, there is now support for mice with more than three buttons, including support for button remapping.

Haiku’s built-in web browser, WebPositive, now uses a newer version of WebKit. Additionally, it contains a number of fixes to the Haiku backend, most notably to reserve significantly less memory, and to fix WebSockets, as well as a variety of crashes. 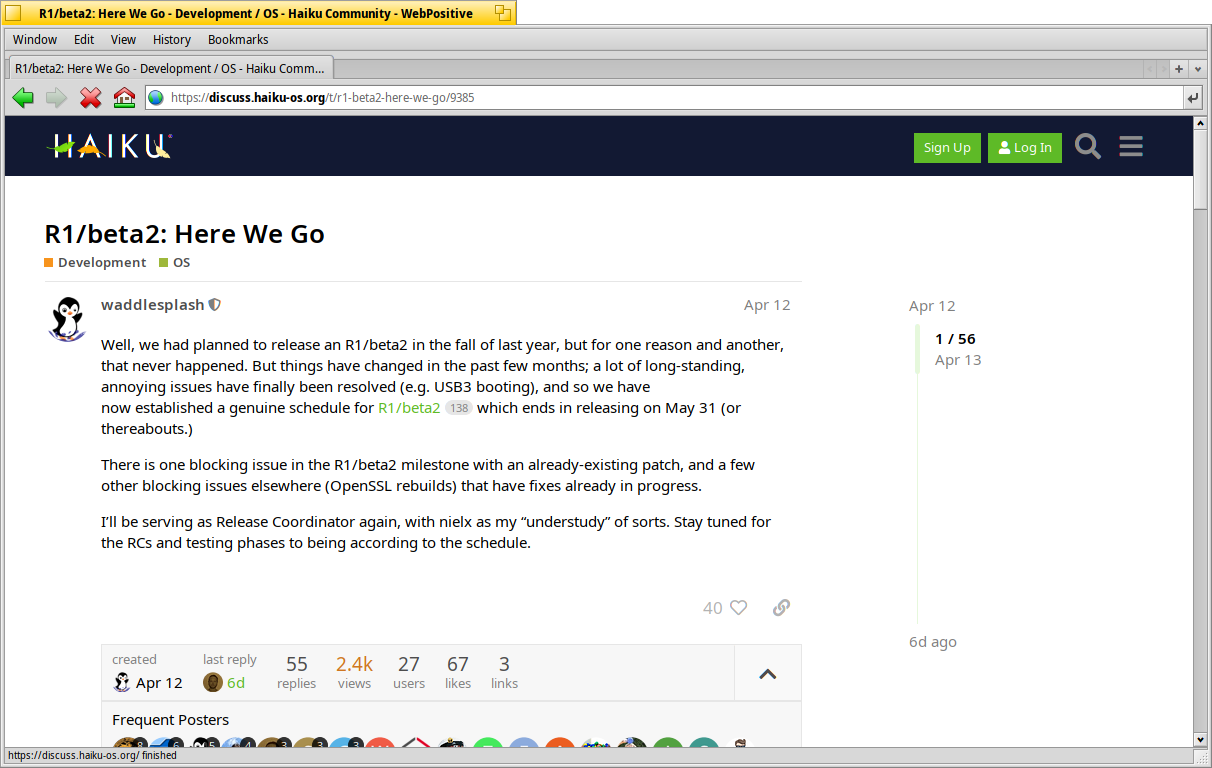 Thanks to Haiku’s relatively robust POSIX compliance, as well as ports of open source GUI toolkits, even more pieces of popular open source software have been ported to Haiku since Beta 1 and are available in the package repositories. 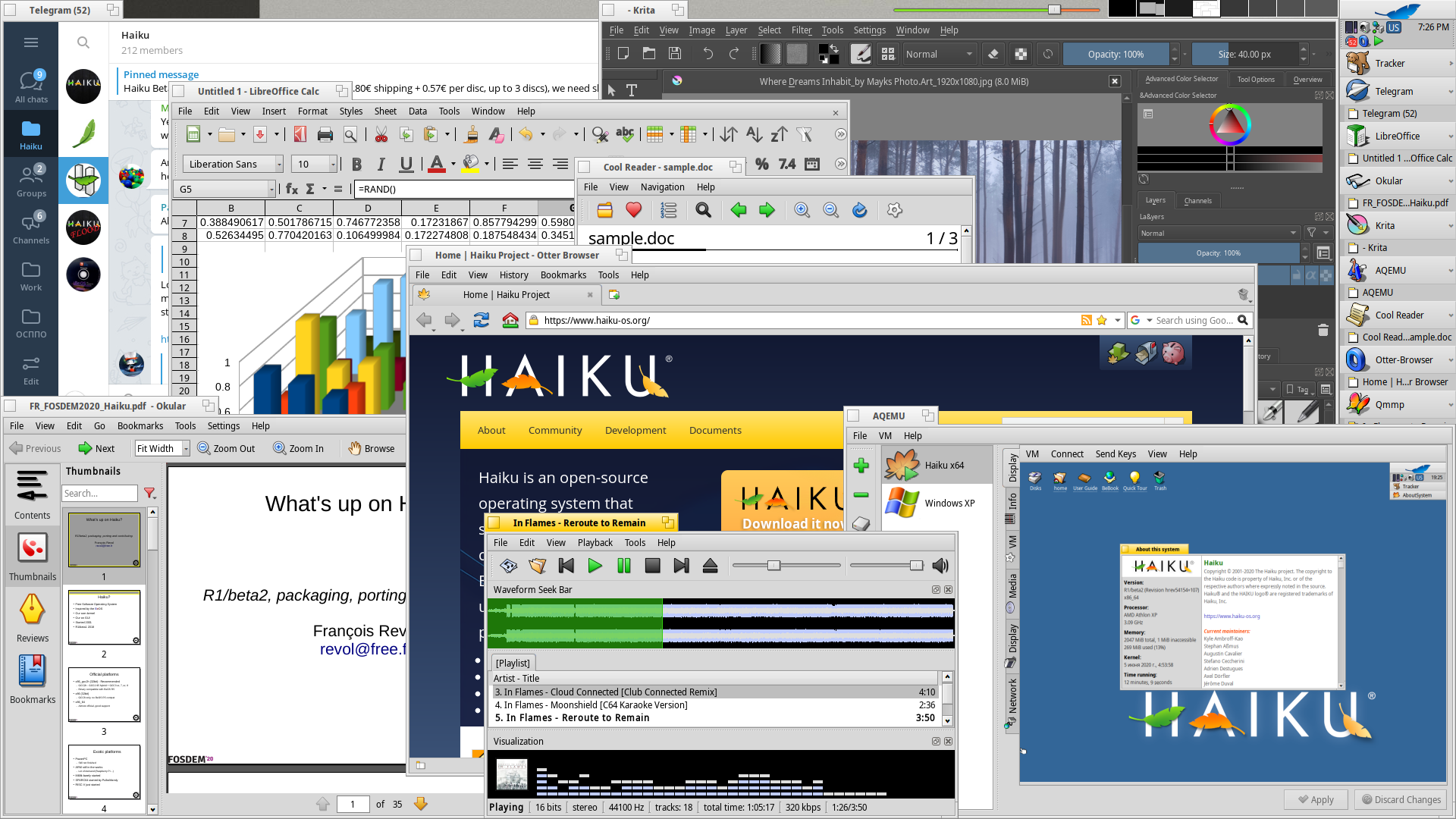 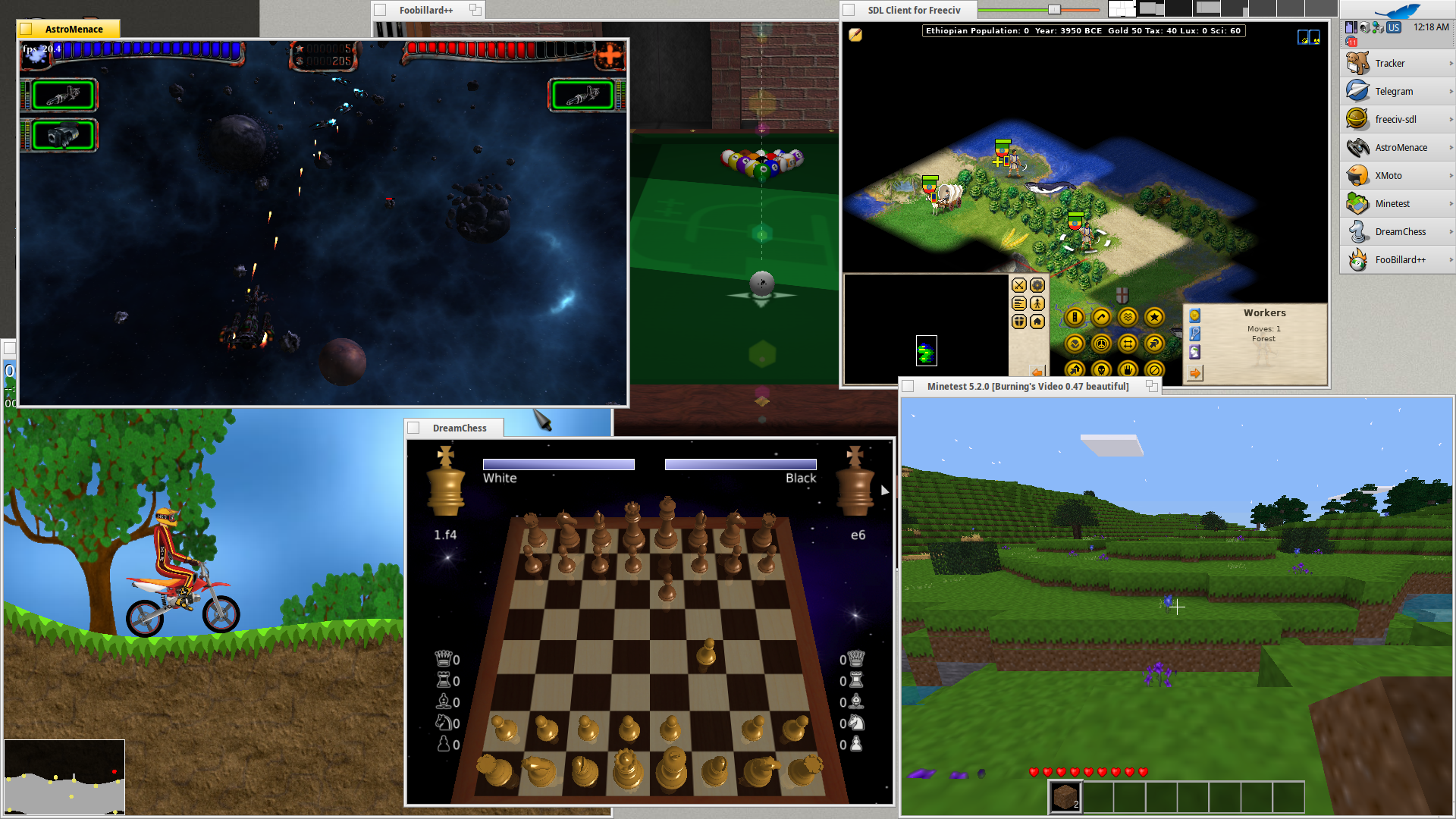 Various games, such as FreeCiv, DreamChess, Minetest, and more, running on Haiku.

Installer now supports excluding optional packages that are included on the installation medium.

DriveSetup will now display more information about the drives in your system. It will show the used space of existing partitions, and it is now also able to identify encrypted volumes.

Finally, there is an upgrade path available from Haiku R1 Beta 1 to Beta 2. 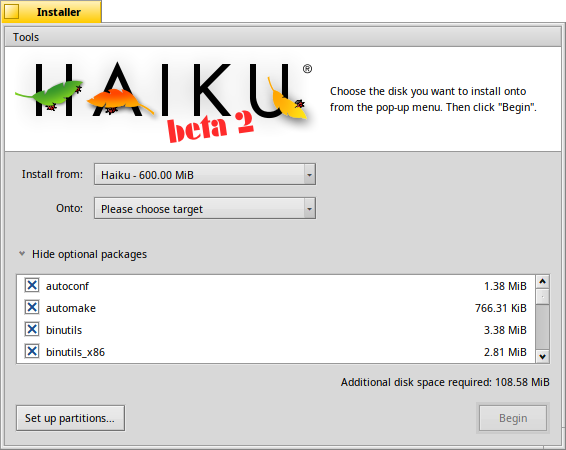 Optional package selection in the Installer.

Completely new in this release is support for NVMe drives, including support for using them as boot devices (though this varies by BIOS support.) Multiple Haiku developers and users are now using an NVMe drive as their primary storage medium, so we are relatively confident in this new driver’s stability at this point.

While present at the time of R1/beta1, support for USB 3 hardware was notably unstable; it was usually impossible to boot from, and devices would disconnect randomly or not function at all. THe XHCI driver saw a considerable overhaul since then, with nearly all USB3 devices now functioning as boot mediums correctly, and input devices operating properly.

A lot of general stabilization work was undertaken during this development cycle, with quite a lot of reproducible (and less reproducible) kernel crashes resolved, and some low-hanging fruit related to system performance resolved. The system is now noticeably more stable than it was at the time of R1/beta1.

Certain early workstation keyboards included a key labeled “Meta” that functioned as an extra modifier key alongside Shift and Control. Although the Meta key is absent from modern keyboards, two major pieces of UNIX software still rely on it being present: GNU Emacs and the GNU readline library, which is used by bash and a wide variety of other software to read input from the terminal.

In beta 2, the Terminal has functionality like macOS': It adds a configuration option to the “Settings…” dialog that, when enabled, causes the left Option key (only) to function as a Meta key. The right Option key retains its normal function, and can be used to enter special characters at the keyboard. 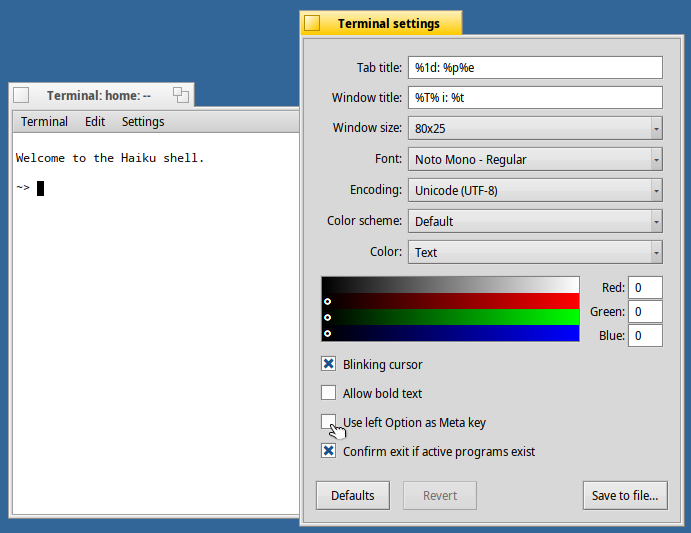 Enabling the Meta key functionality in the settings.

Over 900 tickets were closed during this release cycle (and every one by a human, not by a robot or as a batch operation!), which is too many to list here. But here are a selected few, at least.

Changes for Developers and Porters

For developers, the Haiku Book is a good starting guide for exploring the Haiku API. Recently, the documentation for the layout API has been revised.

Below is a list of detailed API changes since Beta 1.

There are almost 3200 open tickets on Haiku’s bug tracker and over 12700 closed items. If you find what you believe to be an issue, please search our Trac to see if it has already been reported, and if not, file a new ticket at https://dev.haiku-os.org/.

For information about major issues that have been fixed since the release, visit https://dev.haiku-os.org/wiki/R1/Beta2/ReleaseAddendum.

For more help, take the ‘Quick Tour’ and read the ‘User Guide’, both linked on the Haiku desktop. WebPositive opens by default with our ‘Welcome’ page which provides useful information and many helpful links, as does the Haiku Project’s website at https://www.haiku-os.org.

All three contacts may be reached via <nickname>@gmail.com>.