There are a wide range of options and configurations available to boot Haiku, from from modifying the boot sector, to configuring (and possibly installing) a boot manager. For an overview of the various booting options available to Haiku, please check out this page of the Haiku User Guide

makebootable is a low-level Haiku tool to enable x86 MBR (legacy bios) systems to boot from the active Haiku partition.

It is extremely likely that you don't need makebootable. Please read this paragraph carefully to determine if you need it.

Makebootable is not needed when any of these is true:

makebootable should be run against a partition containing Haiku

Makebootable is included with Haiku. However, it can also be accessed from systems compiling Haiku.

GRUB is a common boot manager used on other open-source operating systems. (Including Linux)

In the example below we will have the following setup:

Adding Haiku to your GRUB 2 boot loader is as simple as adding a section to the files used to auto-generate your GRUB 2 menu configuration.

If you previously had only one operating system installed on your computer, GRUB 2 may be configured to wait for the Shift key to be pressed while booting, otherwise no boot menu may be displayed at all, since Haiku is not automatically recognized as a bootable operating system. To force GRUB 2 to always display the selection menu, and to add the Haiku entry in such a way that it will not be removed when the GRUB 2 configuration file is regenerated, perform the following steps:

Of course, the partition in the entries needs to point to the one where you actually installed Haiku. On Linux you can get the UUID values of all the partitions and disks in use by using the sudo blkid and sudo fdisk -l commands.

The EFI entry above assumes you've created the `EFIBOOT` partition and put the boot loader inside it as explained in the official guide. If you didn't, you need to check the path of the `chainloader` directive and fix accordingly.
The EFI entry above assumes that your disk is partitioned using the intel/mbr partitioning system. For systems using GPT partitioning, replace the line `insmod part_msdos` with `insmod part_gpt`.

On Ubuntu (and other Linux flavors), you can eventually customize the GRUB setup further in a GUI environment using Grub Customizer and following this getting started tutorial.

Finally, you can regenerate the boot menu configuration by issuing sudo update-grub and reboot.

GRUB Legacy differs in the numbering of the partitions compared to GRUB 2, starting at 0 instead of 1. The example below shows the naming scheme for GRUB Legacy:

Adding Haiku to your GRUB Legacy boot loader is as simple as adding a new section to your GRUB menu configuration. After installing Haiku, you will need to boot into your Linux operating system and add the following block of code to your /boot/grub/menu.lst (your mileage may vary, this is the default location however). 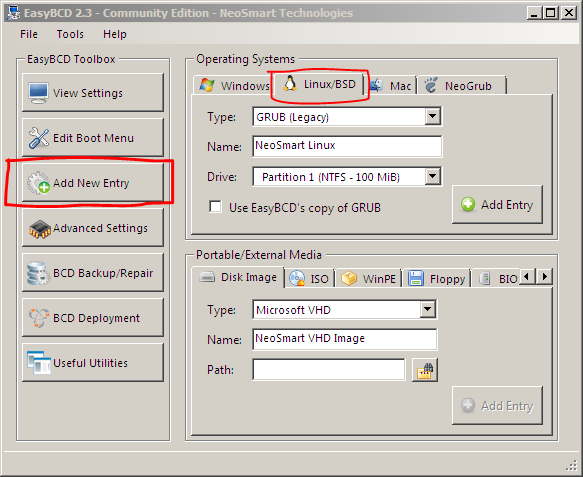 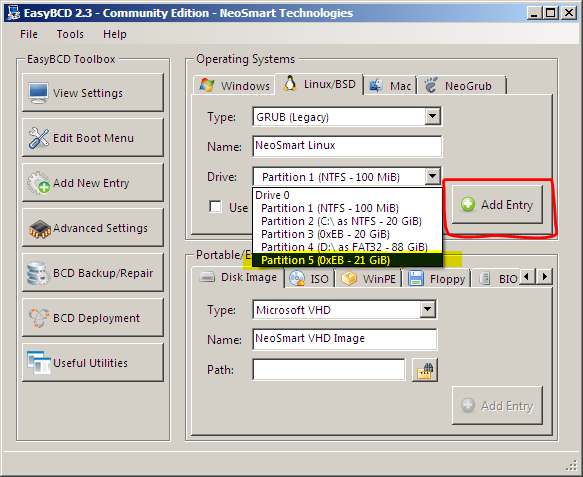 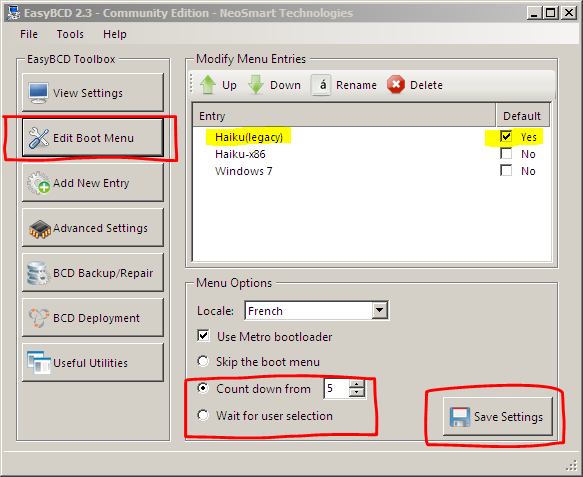