Virtual instances of operating systems are perfect for all kinds of testing purposes that need to be done in a safe and isolated environment. Therefore, installing Haiku in a virtual machine is an ideal solution for people who do not want to install it on their physical computers but want to become familiar with it.

This guide was tested extensively in a Manjaro Linux installation, but it should work on any distribution of Linux that can run KVM.

In this guide, we will be using a nightly anyboot image because nightlies contain the latest Haiku changes - it can be obtained here. However, in order to ensure the stability of your system, the official release of Haiku is recommended.

If you are using Ubuntu or generally more traditional Debian-based Linux distributions, you will need to run the following commands:

In older versions (Ubuntu 18.04, Debian Stretch or older), you will need to run these commands instead:

To start libvirtd at boot, enter the following command in the terminal:

If you are using Arch Linux, you should enter the following commands in the terminal:

Make sure to enable libvirtd, which is not enabled by default:

Installing and running Haiku from an anyboot image

Once the archive with the anyboot image is downloaded and unpacked, you can start the installation.

Secondly, choose the method of OS installation, which should be Local install media in our case. Then, click Forward 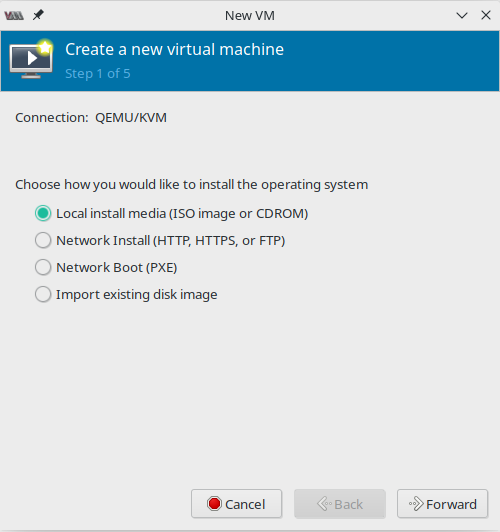 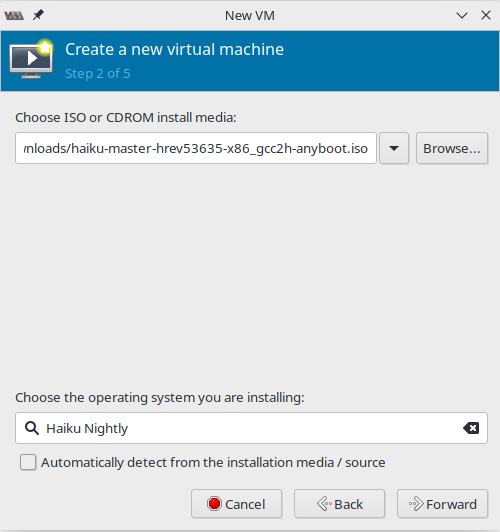 You can now choose the memory and CPU settings. What you should select here, depends on the system you have. It is better to assign more than 256MiB of RAM for smooth running; too much, on the other hand, may cause a lag for the host. Once again, after choosing your desired memory size and CPU, click Forward

You can also adjust the size of the disk image. When done, click Forward 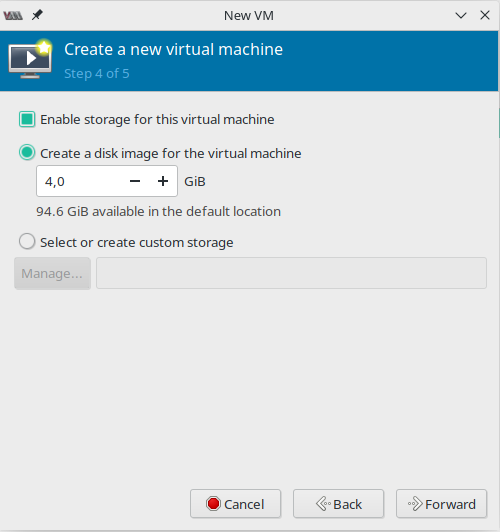 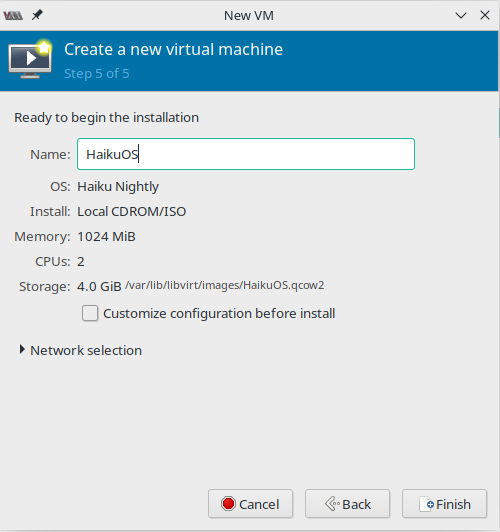 A popup saying Virtual Network is not active may appear. Don’t worry, it’s just asking you to enable the 'default' network. Just click Yes and everything should be fine. If this goes wrong, consult the Troubleshooting section. The VM will now boot the Haiku image file. You can choose to install Haiku or boot to the desktop. Installation is simple and does not differ significantly from a physical one (follow the guides on this page if you are not familiar with the installation process).

After finishing the installation of your VM, if you run into an error that says Unable to complete install: network default is not active or something along those lines, make sure that libvirtd is running by entering sudo systemctl start libvirtd in terminal. If the error still occurs do the following steps:

Step 1. Check if you have a defined network by running:

Skip to Step 3 if your output does look like this.

Step 2. Define the 'default' network by copy-pasting the following lines into a file called default.xml:

Now, in order to add that network permanently to the KVM host, run the following:

There’s a chance that you may receive the following error when you run the aforementioned command:

In order to fix that, you will need to install firewalld.

After installing the package, run the following commands in order to enable the service and make networking work again:

If you want your virtual network to start automatically in the future, run the following command:

Running sudo virsh net-list -all should now return the following: