Today, the main focus lies without a doubt on the development of Haiku, which is currently in the exciting time leading to its upcoming first alpha release. Most of the European core developers were there and discussed problems and possible solutions that they could implement and transfer to the code repository right away, as the conference rooms had a (most of the time working) internet connection.

Which will be needed especially in the week that followed the BeGeistert weekend, when everyone will be coding like mad on the Haiku Code Sprint. 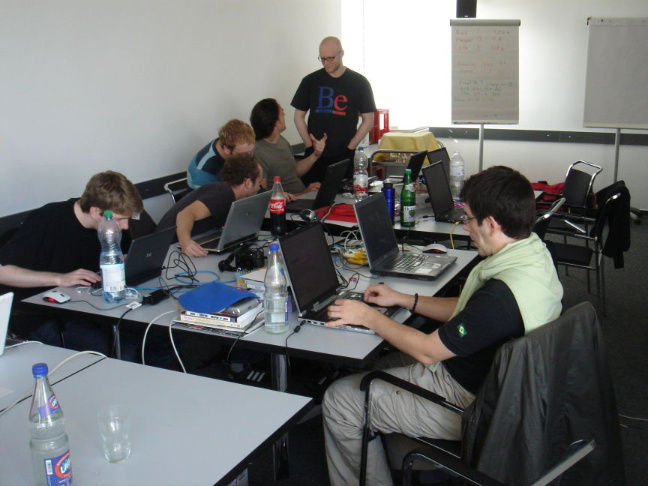 The picture shows the two, let's say, core coder desks (from left to right):
Michael Lotz plunges into his screen, Alexandre Deckner and Stephan Aßmus put their heads together, Axel Dörfler shows Ingo Weinhold how long is 15 inches and François Revol makes a funny face. Great picture. <rolleyes> I wish I had taken some more...

If anyone happens upon better pictures, please link to them in the comment section. Usually Jérôme Duval sat beside François and Oliver Tappe sat in front of Stephan.

I don't want to enumerate everyone, because I would surely forget someone. Let's just say it was a pretty international crowd with a large delegation from France. Other guests came from the Netherlands, Belgium, the UK, Sweden, Switzerland and Italy.

As almost everyone got their laptop, note- or netbook with them, many things could be directly demonstrated. Thus, some bugs were shown and could be immediately fixed. Us non-developers could help each other as well by e.g. sharing tips how to better use the buildsystem or learn some details of Icon-O-Matic unknown before.

On Saturday Stephan Aßmus was pressured to a spontaneous presentation, among other things on Icon-O-Matic. He started with a short status update of Haiku in general and showed what he was working on even while he was traveling to Düsseldorf on Friday. He taught MediaPlayer to use and manage playlists and you can now activate filtered scaling of videos in non-overlay mode.

Then Stephan demonstrated how to work with Icon-O-Matic. Paths and styles are assigned to shapes. Several shapes can reference the same paths and additionally be individually transformed or assigned an effect like a contour. If the path is changed later on, all shapes that use it are changed automatically accordingly. That's how you can easily create e.g. a shadow that changes with its object. Reusing paths and styles makes Haiku's vector icons so remarkably small, which is why opening and displaying the contents of a folder in Tracker is quite fast.

After showing how to export as PNG, SVG and a coding-relevant resource file, Stephan explained how to use the "Level of Detail (LOD)" settings. Depending on the display size of the icon, shapes can be shown or hidden. For example, you can have a certain stroke width for 16x16 by using one shape and have another shape with a different stroke for all other sizes.

After this presentation, many screens showed Icon-O-Matic as people started to experiment and help each other trying out what they just heard.

After Stephan was so successfully coerced to a talk, Charlie Clark pulled the same stunt with François Revol. In the past weeks, François has worked a bit more on the lean browser NetSurf. As was apparent from his demonstration, it's running reasonably well. HTML pages including CSS are quickly rendered and scrolled. Nice: If you select the contents of a webpage and copy it to the clipboard, you can paste into StyledEdit and retain colours and formatting. NetSurf could become a small HTML renderer to quickly display documentation, for example. To that end, François is planning to make it replicantable, i.e. it will be possible to seamlessly integrate NetSurf into other programs. Then you could install a replicant onto the Desktop or, more important, BeHappy (a tool to read API documentation) wouldn't depend on NetPositive any more. 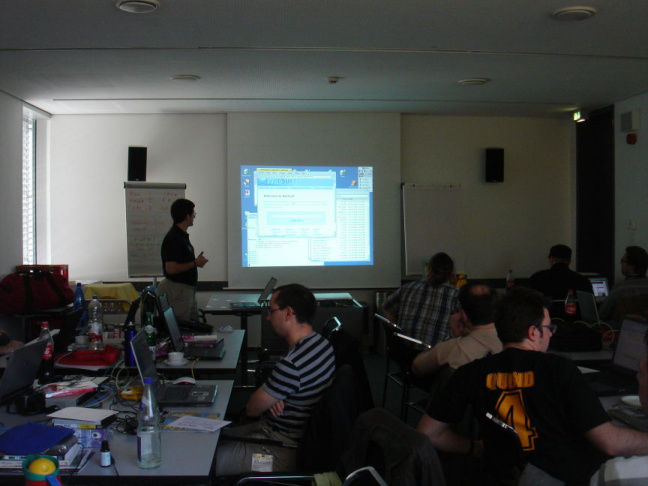 Then all the hacking and chatting continued until Charlie led a group of 13 on a sightseeing trip to a local brewery into Düsseldorf's old town. The brewery was called "Zum Schlüssel" which coincidentally was the same pub that I have visited with Nicholas Blachford the day before to knock back some "Alt" (the local and very tasty beer variety) after strolling through parks and the old town.

Since the majority of our group didn't speak German, Charlie had to translate what our master brewer had to offer, while we followed the brewing process down narrow passages and steep stairs. Charlie did a great job, especially considering that the brewing craft comes with all kinds of obscure expressions.
Finally we could hold the result of all the malting in our hands and, even better, pour it down our dry throats. Well done, Mr. Brewmaster guy!

That's "Zum Schlüssel" from the outside (taken the day before) and Charlie, bright eyed among hectolitres of future Alt. Behind him is Jérôme's girlfriend Michaela and... I think... Matthias. Sorry if I remember incorrectly.

While in the "Schlüssel" barrel after barrel continued to be emptied into the small 0,2l glasses, we fought our way over the impressive longest open-air bar of Germany (maybe of the world) to a Spanish Restaurant, where, sadly, the only seats left were inside. After tapas and other delectables we left for the youth hostel. On our way we sampled another speciality of Düsseldorf: Killepitsch, a 42% sweet herbal schnapps that Nicholas was raving about all Friday. Tasty, although the mild October night didn't call for an internal warm-up.

Back at the hostel, everyone continued chatting with the ones left behind, took another beer from the fridge... or diligently work on Haiku's future. :)

After a relaxing night on a slightly too soft mattress and an opulent breakfast, the Sunday continued quite similar to the day before.

In the afternoon Bas de Lange, who, like already at the previous BeGeistert, came from Holland by bike, presented the free operating system of his choice: Syllable. Besides the AtheOS based desktop, there's also a server version using the Linux kernel. A key element of its development is security, implemented by "capabilities" a technique that resulted from academic research in that area. That was a bit too technical for me, but was well received by our developers. Bas closed his presentation with an invitation to a Syllable event in Holland. If you want to be Haiku's ambassador there for a change, I suggest you get on your bike and start your training. :)

Later that afternoon André Meissner went from table to table to inform about BeFAN and maybe enlist new members. BeFAN is about to finish the last bureaucratic barriers to change into the HSA, the "Haiku Support Association". Their goal is to offer an international platform to support Haiku. Right now that's done by organizing BeGeistert and the subsequent Haiku Code Sprint. With the very modest fee of 3 EUR/month, plus gladly received donations of course, those developers will be supported that otherwise wouldn't be able to attend BeGeistert and the Code Sprint. Anything besides that depends on the creativity and participation of the HSA's members.

And then I had to leave BeGeistert to catch my plane.

Thanks to the hints I got at the hostel's reception, my way to the airport was quicker than the way I took when arriving. Always take the SkyTrain from he airport and continue with the regional train to the Hauptbahnhof. It's much faster than the dingy S-Bahn that stops at half a dozen stations. One ticket of category A, that's 2,20 EUR. Excellent.

The next BeGeistert is planned for April 2009 and I'm already looking forward to it. Last but not least, my thanks to Charlie Clark and André Meissner who splendidly mastered all organisational obstacles as usual. And to my Swedish roomie luroh for helping me out with some shampoo, since mine was confiscated at the airport. For security reasons, obviously. Boy, that sure was a close one.