(R) II: Return to the USPTO 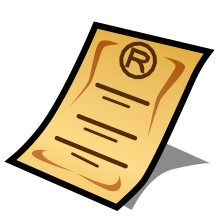 On July 12th, 2011, Haiku® received its registration with the United States Patent and Trademark Office (USPTO). This registration is for "Haiku" the name (as opposed to the HAIKU logo®, which became a registered trademark in March). More precisely, this new registration is known as a "standard character claim" and affords much more protection than the "stylized mark" registration of the logo.

Now for a quick crash course in trademarks. First, trademarks are specific to types of goods or types of services. As an example, our trademark registrations relate to computer operating systems, but not to washing powder. In layman's terms, a "stylized mark" is a specific representation of a trademark. In our case, the HAIKU logo consists of the word "HAIKU" in all uppercase letters, with 3 leaves that partially cover some of the letters. That registration is specific to that description (and similarly confusing marks). A "standard character claim" is more generalized, flexible, and stronger. That registration applies to any form that "haiku" can take -- whether it be as typed characters or a graphical representation.

So, back to the question that many of you may be wondering -- "What does this do for the Haiku Project?" It strenghtens everyone's ability to associate "Haiku" with the computer operating system that the Haiku Project creates. Additionally, it provides some artistic freedom. Let us imagine a purely hypothetical scenario to illustrate how this "standard character claim" registration provides that. Some years have passed and the project decides to create a completely new logo for Haiku. In this imaginary scenario, that new logo would be protected by the "standard character claim" registration. In short, it affords us the confidence that there will be only one operating system that can be called Haiku, no matter what the logo looks like.

Lastly as a reminder, Haiku, Inc. provides a page describing the trademarks and their proper usage.