Exciting times these are. Haiku, Inc. steadily marches towards being capable of funding a core developer for 12 months of contractual development. Thank you donors! BeGeistert 024 has spurred a flurry of commits, even continuing past the coding sprint. Google has accepted Haiku as a mentoring organization in its Google Code-in 2011 program. The version control system has been migrated from subversion to git. Thank you sys-admins! And on top of all this, the

As you may remember, Alex first came to the Haiku project as a Google Summer of Code 2010 student. During that time he worked on taking the Layout API public, where he earned commit access through his hard work. This past summer, Alex participated as one of Haiku's Google Summer of Code 2011 mentors, where he helped shaped his student into another potential long-term contributor.

His summer scholarship has a value of $NZ 5,000. The research project would last for about two months. The interim title of the research paper is "Integrating Web Apps and GUIs". Alex's previous work with the Layout API will most certainly come in handy. Dr. Christof Lutteroth will be supervising Alex. Christof already has several research projects that involve Haiku -- the Auckland Layout Model (ALM) and Stack & Tile.

As mentioned earlier, this academic opportunity is being extended to all. Naturally, people who are already proficient at coding for Haiku are more effective for Haiku-related projects. However, this could be your opportunity to become proficient. Here is a letter from Christof: 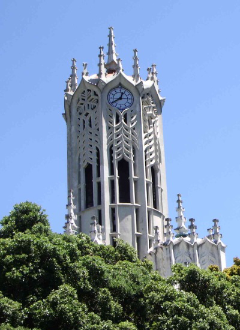 Over the past few years, there have been several HAIKU-related research projects at the University of Auckland. The most prominent of them being Stack & Tile, which offers methods for organizing running applications by either literally stacking them on top of each other or tiling them side-by-side.

We, Christof Lutteroth and Gerald Weber from the Department of Computer Science, would like to continue this tradition of utilizing Haiku as a platform for academic research. We are looking for potential postgraduate students and visitors to seize this opportunity to further their own education, as well as Haiku.

It would be our pleasure to supervise you in Haiku-related postgraduate projects, such as Masters or PhDs. Postgraduate students would need to pay tuition fees. As a result, it is advisable to look for a scholarship when pursuing that option. Most countries offer scholarships for studies overseas, and we are happy to support scholarship applications.

Alternatively, it is possible to host visitors who work with us at the University of Auckland. A visitor can get a workplace at the university. Sometimes visitors are students from other countries, who have a common research interest with the academics here. This may be interesting for a student who is already receiving funding from another university, to work on a Haiku-related project with us for a while. Many universities support research visits of their PhD students financially.

Thank you, University of Auckland! This enables another of Haiku's contributors with an opportunity to further their education, while at the same time advancing Haiku!