This is excellent news.

As mentioned in the last contract announcement article, the available funding of Haiku, Inc. was starting to dry up. It had gotten so low, that Adrien and Paweł were told not to expect a third month of contractual development.

However ... Google has contacted the project and informed us of a $5,000 USD donation! The donation is being processed and should be deposited in the next few weeks. To simply say "Thank you." is not enough to express the depth of our gratitude. Instead, many agree that actions speak louder than words. This donation will immediately be used to finance Adrien and Paweł's contracts for an additional month. There are few, if any, better uses for this money than to provide two previous Google Summer of Code students the opportunity to flip bits, not burgers. ... and by the way, Thank you Google! :-D

Good news everybody -- contracts and more!

If there was ever an example of the saying "Money talks and ...", this is it. Since publishing the "HAIKU needs you!" article in late August, over $5,000 has been raised! This is from 110 individuals who made a combined 75 recurring monthly donations and 72 one-time donations. The yearly total is soaring over $20,000 with the help of 322 donors making 354 recurring and 322 one-time donations. Because of their efforts and generosity, we are able to finance another month of contractual development for both Adrien and Pawel! Thank you and congratulations to everyone who helped!

We have heard you. Other areas of Haiku need some loving. Though, we need your contribution to make this awesome.

First and foremost, the package management contracts are going well and are starting to wind down. Ingo is expected to finish his last month within the next week. Oliver will have another 160 hours (spread over two months). As for actual progress, as seen in Ingo’s recent blog post, it has been amazing. Hybrids are working (even ground work is done for future possible x86_64 + x86-gcc4 + x86-gcc2 combinations!). Building and updating Haiku for new platforms (e.g., various ARM platforms) is easier for developers. The tool for building ported software, haikuporter, is much more versatile, functional and reduces complexities for porters. They have requested wide spread testing of the HaikuPM images, in anticipation of merging the changes back into master branch.

On to current news – two developers, Adrien “PulkoMandy” Destugues and Pawel “pdziepak” Dziepak wish to have the opportunity to dedicate full-time hours improving different aspects of Haiku. Adrien plans to work on our port of WebKit and our native browser, Webpositive. His first task will be to bring the Services Kit to maturation, which was a former Google Summer of Code project. Pawel desires to enhance CPU scheduler, with respect to utilizing caches better, performance on HyperThread enabled processors and power-savvy (as in wattage consumption) features. As of now, there are only enough funds to provide each developer with a single month of contractual development!

BIG contracts and a call to support HAIKU! 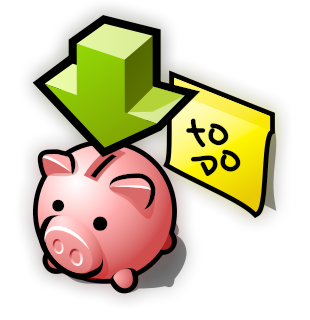 We are excited to finally share this news about development contracts! We are going to be funding a minimum 800 hours of HAIKU development and with your help, many more hours! And to help you preview the progress, there is a set of pre-built package management images available!

As you know, Ingo and Oliver have been working these past months on Haiku's package management for extremely low rates -- to the tune of €12.50 per hour. It is a commendable and fortunate event to have developers who are able to devote large blocks of time in their schedules for such a meager pay scale. This time, we are going to try new models for each of them, in order to secure even more dedicated development time.

Bummer! We did not make it into Google Summer of Code this year. We were fortunate to be selected so often in the past, but apparently it’s now time to let other projects benefit from this summer event; 177 out of 417 projects were chosen this year. GSoC 2012 went especially well for us though, which certainly makes this announcement that much more difficult to swallow. Congratulations and best wishes to the organizations that were accepted, and hopefully we’ll have better luck next year. 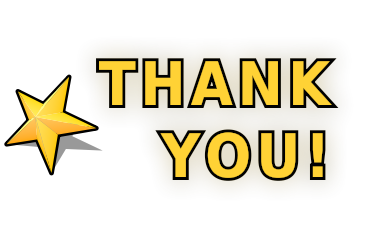 What an upbeat way to start the new year! Google, Inc. has donated Five-Thousand Dollars to Haiku, Inc. Earlier in December, a Google employee contacted the project to coordinate their donation. The transaction was received this month and shows as part of 2013's fundraising progress. This donation will greatly assist in securing additional development time specifically for HAIKU! Thank you Google, Inc!

Haiku is looking for Web Developers

The Haiku project is supported by various websites and web services, such as the development tracker and the translation tools. For all these services we have various short and long term goals and objectives, and we are looking for help to realize our plans.

Helping out means that you are contributing to the continued development of Haiku! We are looking for people with Drupal/PHP skills and people with Python experience.

What is Google Code-in ? GCI is a contest for pre-university students (from 13 to 17 years old) with the goal to encourage young students to participate into open-source development. To achieve that goal, open-source organizations sets up various tasks and students are invited to claim them. Various prizes are awarded and, this year, each organizations are going to award two (2) grand prize winners amongst participating students. When does the contest start ?

Due to the immediate testing efforts of HAIKU Release 1 Alpha 4, several critical bugs were detected by testers and reported on our bug tracker. On several hardware configurations, those issues prevented Haiku from booting properly. Since then, those bugs have been squashed and are resolved in this bugfix update, R1 Alpha 4.1. There are two general issues fixed by this point release: Deskbar can freeze at boot-up on read-only media. 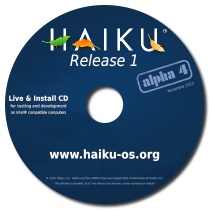 The Haiku Project is excited to announce the availability of our fourth official alpha release. A year and four months have passed since the Alpha 3 and the Haiku Project has been busy. The main purpose of this release is to provide interested third party developers with a stable version for testing and development. To aid with that, Haiku includes a rich set of development tools.