Back from GSoC mentor summit

Hi there! This week-end was the Google Summer of Code mentor summit. This event gathers mentors from all organizations participating in GSoC and GCI for an event hosted by Google.

Usually the summit happens at the same time as BeGeistert, and as a result I never made it there before. But with no BeGeistert happening this year, I could finally make it.

Normally each organization is allowed to send 2 mentors, but we managed to get 6 people from Haiku to attend this year (by a combination of an extra mentor allowed because we do GCI, putting people on the waiting list and taking the slots freed by other orgs sending only one (or 0) mentor), having some Haiku people working at Google and helping run the event, and an hand-crafted badge to get into the event without registering) 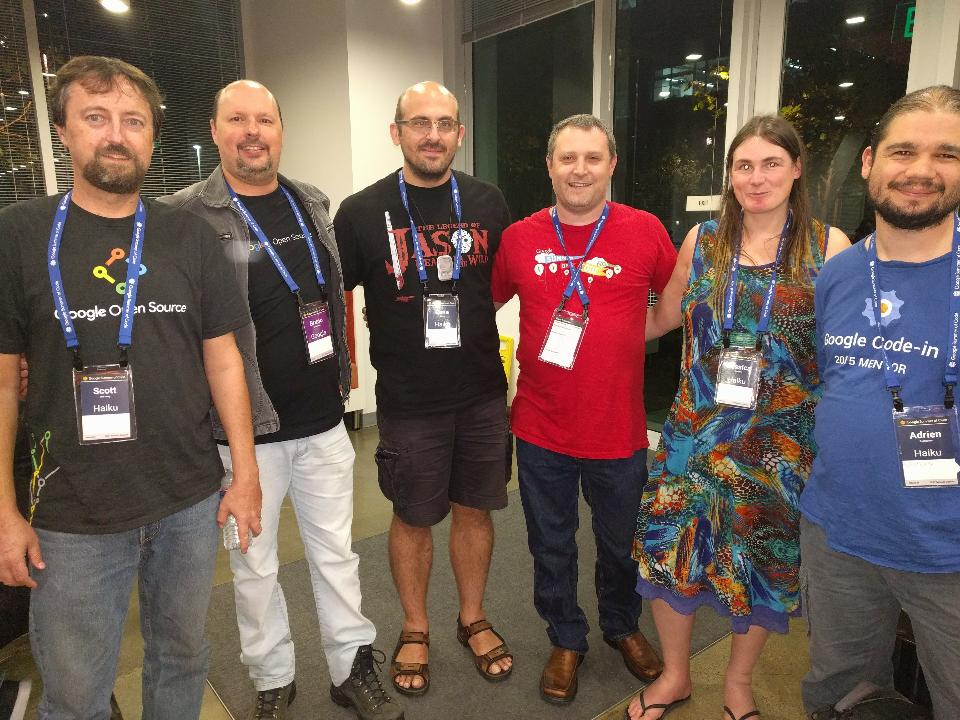 This year the week-end started with a more formal than usual social event. After checking out our rooms at the hotels, we took a shuttle to the Google Tech Corners (buildings dedicated to such events) and gathered in one of the restaurants there for a welcome dinner. Then there was an opening session where the Google Open Source team introduced themselves (Cat, Chris, Stephanie, Marie, Robert, Josh and Maria, who joined the team just two months ago) and gave an outline of the plans for the week-end.

In order to get people to know each other, we were asked to introduce ourselves in just 4 words. There were some fun and interesting choices (my personal favorite: "Linux: kill, kill, kill!" from a FreeBSD mentor). A "scavenger hunt" game was also launched where people would have to find mentors (or other people) having characteristics from a given list and trying to fill all the boxes (going from "I don't like pizza" to "I jumped off a plane").

We then stayed for the evening in the room, meeting mentors from other orgs and enjoying some Google ice cream. 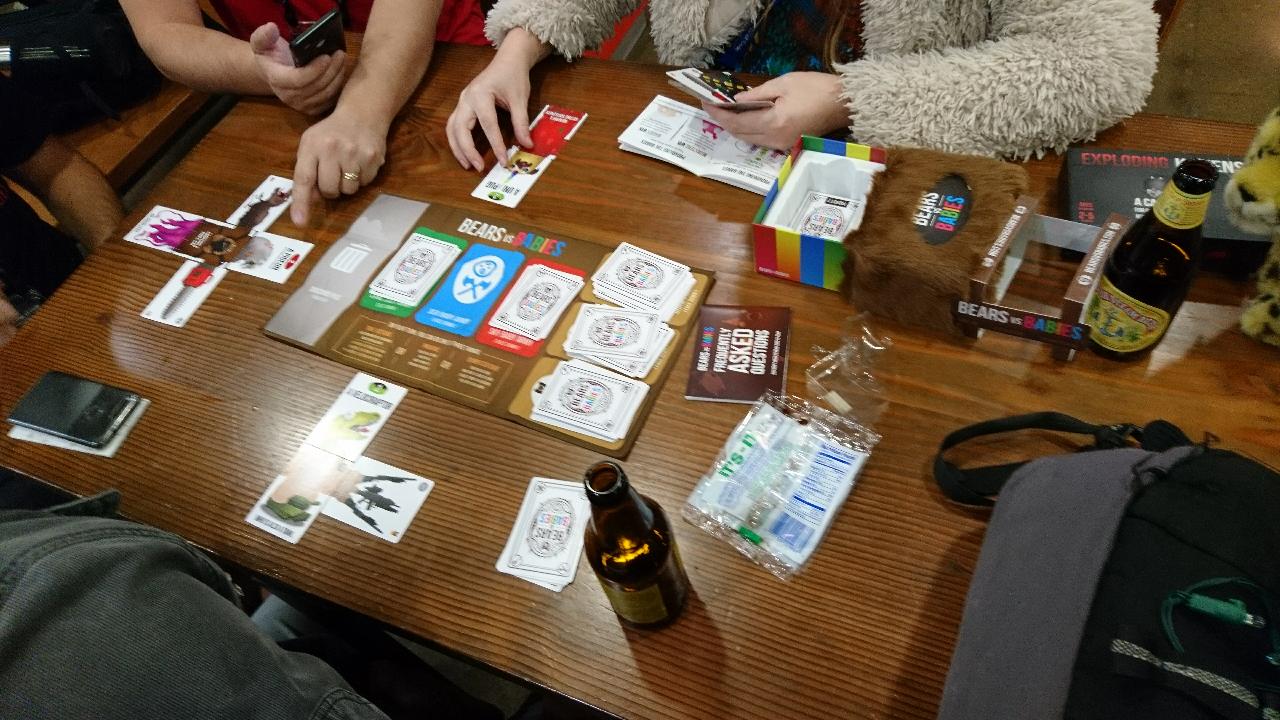 Beasts vs. Babies, an interesting card game Jessicah introduced to us.

I was quite tired because of the long plane trip and timezone changes (30 hours days are not manageable) so I went to sleep at a reasonable time - but not before trying to figure out how to fit all of us, plus Jessica's bike, in Bruno's car (this din't work and the bike and her owner took a shuttle bus eventually).

The main part of the event started on saturday. The format is an "unconference". The idea is to get people to discuss things together and come up with new ideas or share existing ones. Rather than people reading their prepared-in-advance slides, the sessions are rather in the format of a meeting, people sit around a table and talk about a given topic. The topics are allocated by putting post-it on a large board with a list of rooms and timeslots. 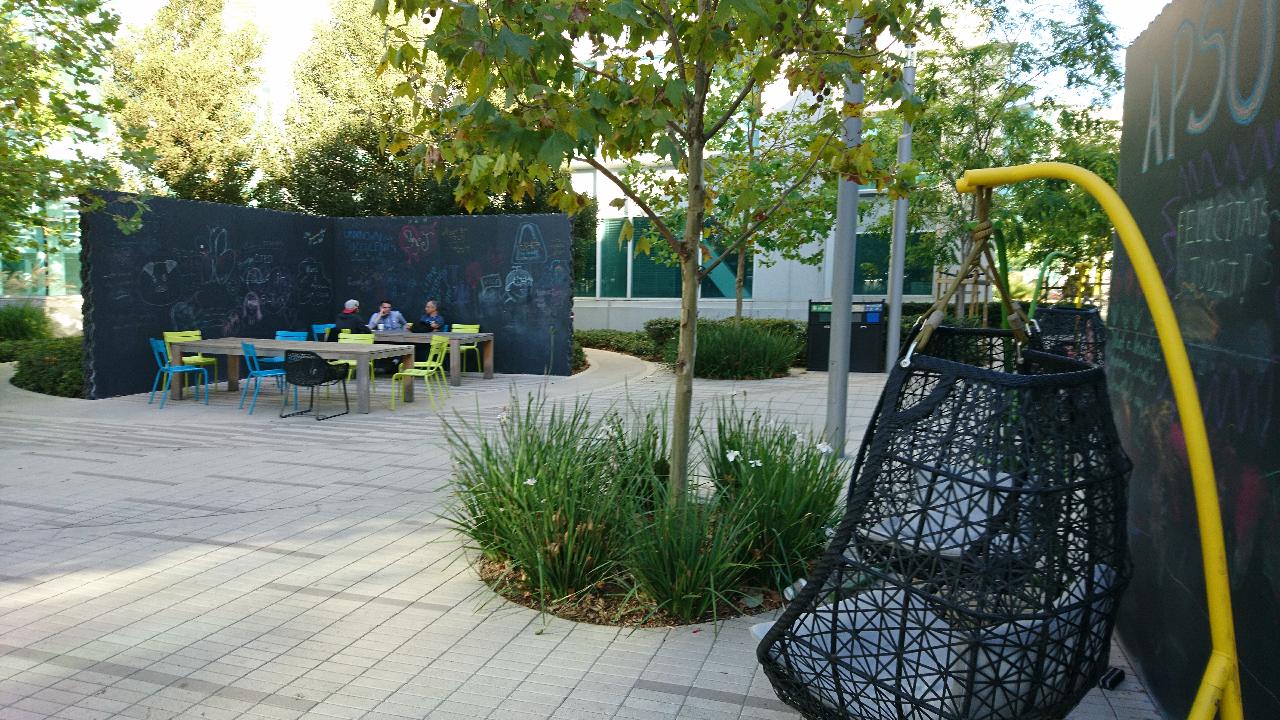 Interestingly, the Haiku mentors often decided to attend the same sessions - except in some cases where two interesting sessions took place at the same time and we had to split the team. We of course attended the "Non-Linux systems" session, meeting with MacPorts, FreeBSD, QubesOS, as well as some projects interested in improving their portability (git, and some other I forgot - sorry!). There were other interesting sessions on getting contributors to stay (where for the first time I heard of an open source project which does NOT want getting new contributors), brainstorming on how to get multiple organizations to collaborate on their GSoC projects (where we had some experience with the work on SDL 2.0 some years ago), and of course the session on Google Code-In where we could answer other organization's questions about the contest (which we have just applied to for an 8th consecutive year) 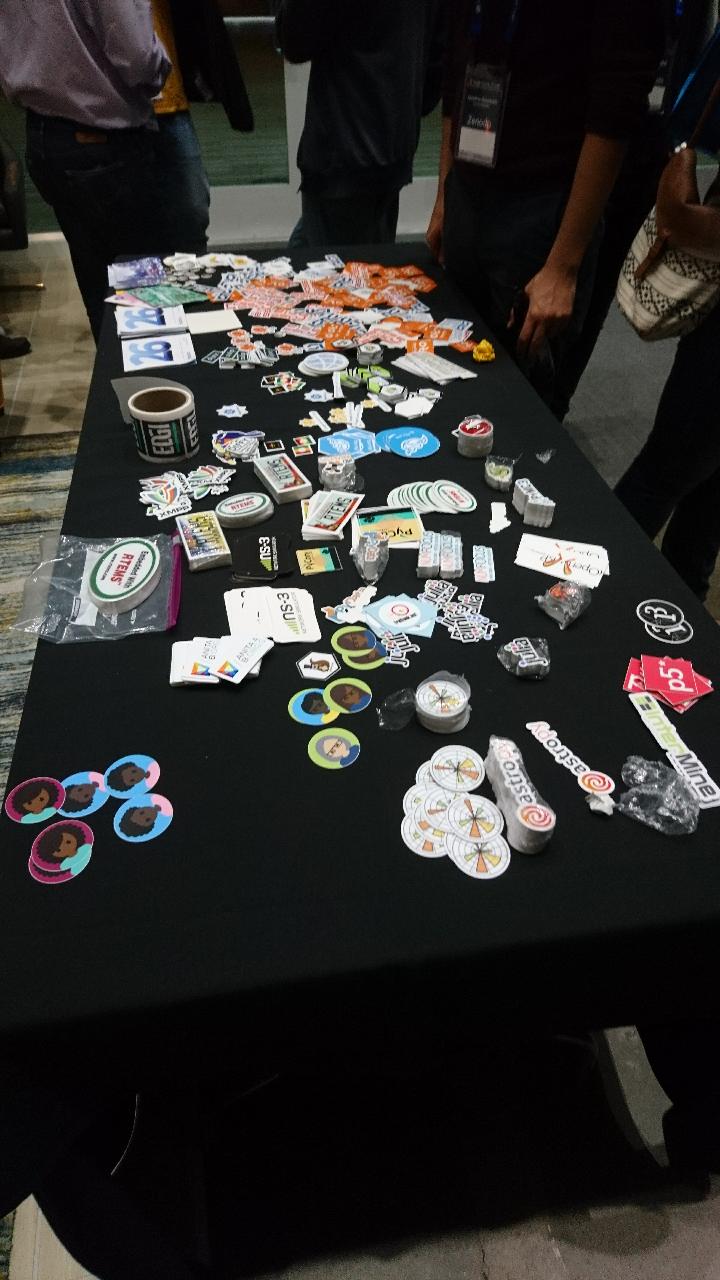 Aside the sessions, there was also pleinty of space in the building to just sit down and talk with other people (or sit in front of a computer and hack, but that is really not the point of the event and there was always someone to discuss things with anyway). Some other interesting features of the event are the sticker table - where orgs can put their stickers for others to collect, and the chocolate table, where mentors try to bring the most unusual chocolate from their area. So if you are after pear or vodka flavored chocolate, this was the place to go. 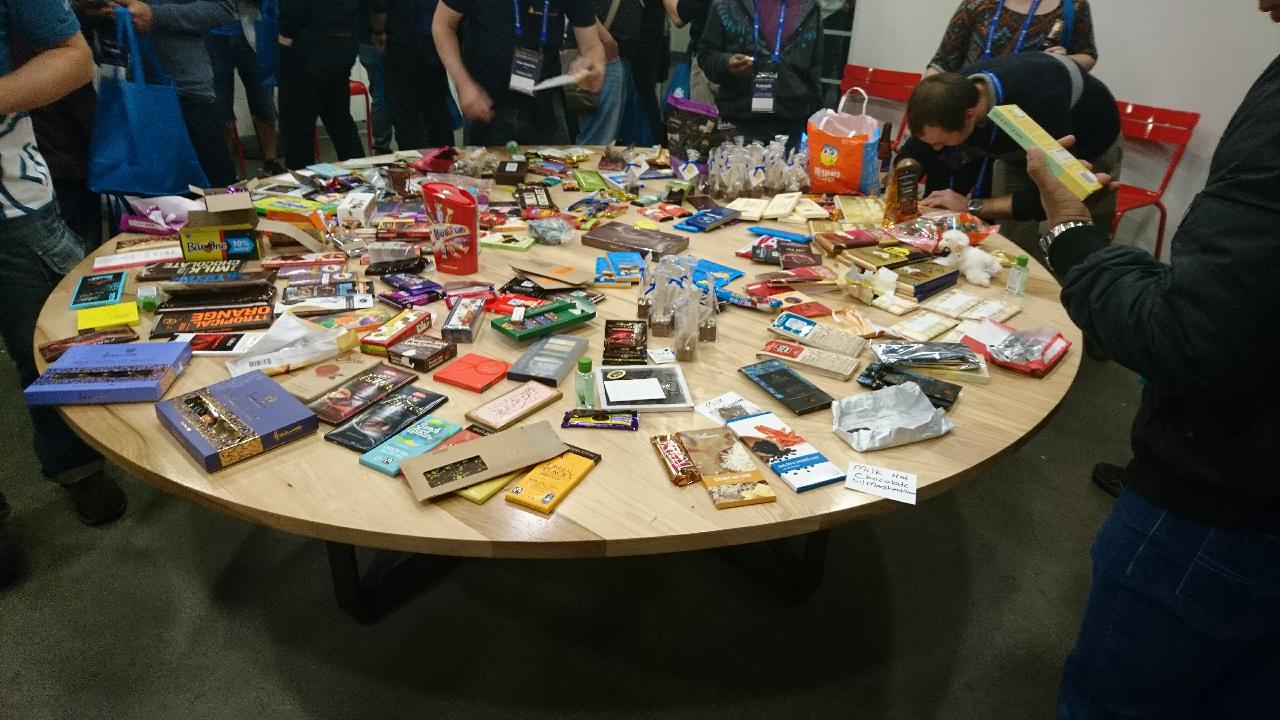 Google also had their own table where they kept adding "swag" over the week-end: T-Shirts, books, socks (yes, GSocks for the GSoC!), pens and notebooks, etc, for mentors to collect. 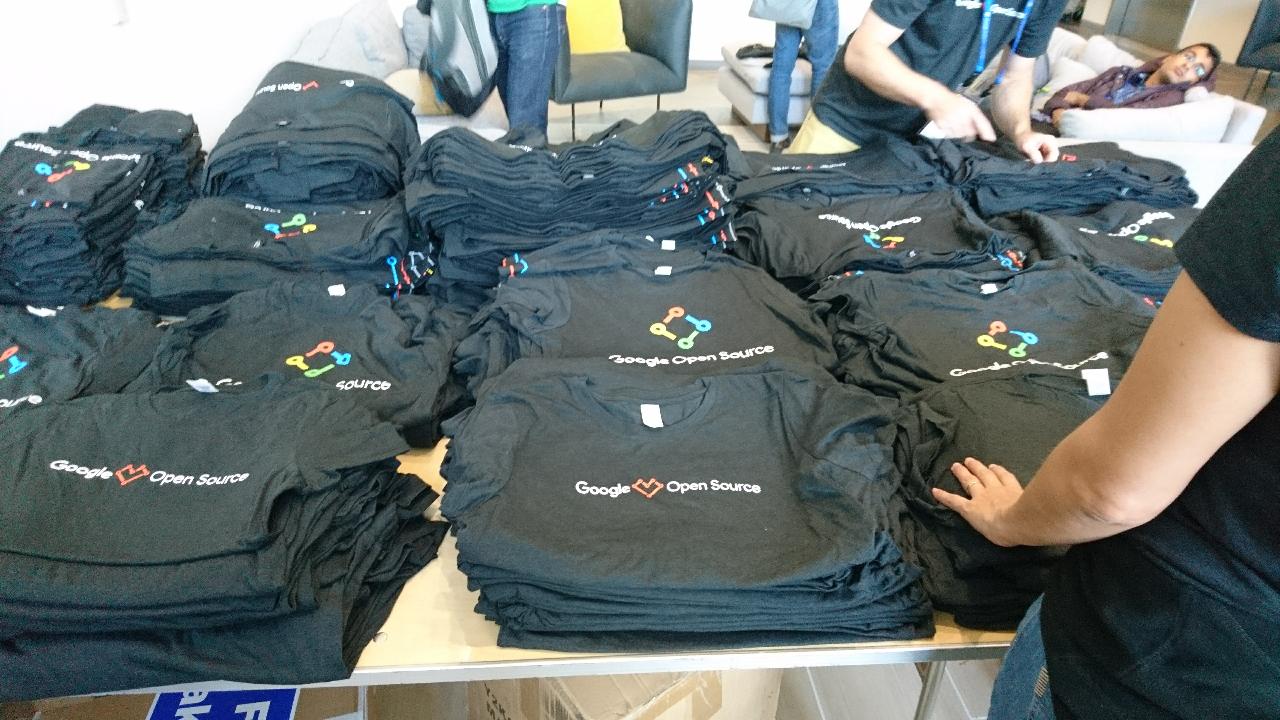 In the evening, there was a "social event" outside with a band playing music, bonfires, drinks, etc. However I went to sleep quite early as I was very tired. 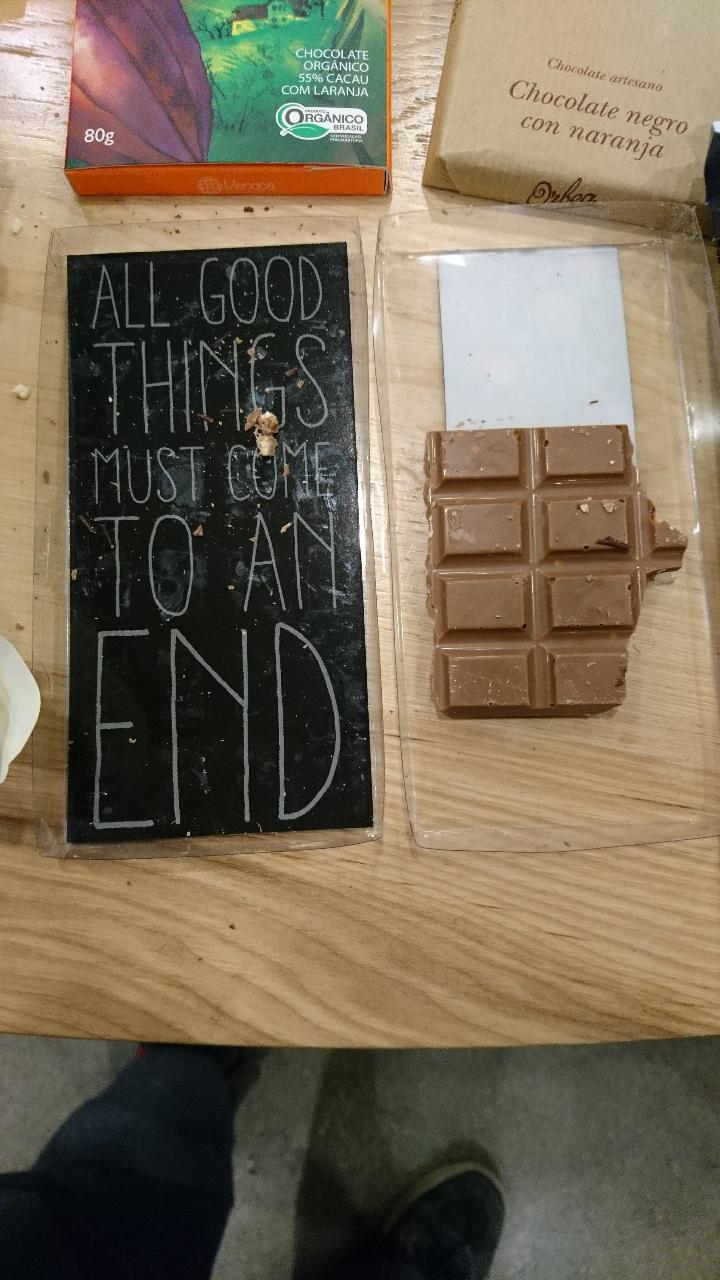 Sunday had more sessions, ending with the closing ceremony, with a prizegiving for the mentor scavenger hunt (it was tricky to win it, you had to remember to ask not only mentors, but also the Google team and even security guards if you wanted to fill it all!). Then it was already time to board the shuttles back to the airport.