Get the Haiku Source Code / Pushing Patches to Haiku 101

Haiku’s source code is currently being hosted in a Git based repository with Gerrit code review. Anonymous access will allow anyone to download Haiku’s source code; However, the authenticated (non-anonymous) method is required for submitting patches.

Although most contributors tend to disclose their real names, we do not have a real name policy and a couple of contributors contribute to Haiku pseudonymously. That means that it’s possible for anyone to contribute.

Anonymous access is read-only. If you want to submit changes to Haiku, you need to follow the instructions for patch submitters, in the next section.

If you don’t care about the commit history and want to keep the download small, try using the parameter --depth when cloning. --depth 10 limits the history to the last 10 commits, for example.

Configure your git! Before making any commits to the Haiku repository (local even), be sure to configure the Git environment on your local system! Failure to configure git properly before a commit will result in incorrect naming in your commit, making it impossible to give you well-deserved credit for your work.

Configure Git on your system:

Before making your first commit on a new system, be sure to configure Git. These global settings are stored in your git configuration directory (~/.git/ or for Haiku: ~config/settings/git/) and will be appended to each commit as your personal information.

On macOS, you must set the following option in order to avoid problems with the unicode representation of filenames:

Make sure your ssh key is generated with ed25519. RSA keys will not work with Gerrit.

Upload your SSH public key in Gerrit SSH keys settings page. If you don't have a key yet, you can generate one using ssh-keygen.

If the e-mail address used in your commits does not match the one in your github account, you will need to add and verify it in Gerrit E-Mail address settings.

Want to submit your first patch? Thanks, that’s great! You don’t need to checkout the sources again. Instead you can update your existing copy of the source to use the commiter access. Just change the remote URL:

You also should install the Gerrit hooks to generate Change-Ids:

Haiku's source code needs to reside on a case sensitive file system.
In short, such a file system recognizes "ThisIsAFile.txt" and "THISISAFILE.txt" as two different files. Some file systems that are (or could be) case in-sensitive include, FAT32, NTFS, and HFS+. macOS's HFS+ is case in-sensitive by default. For more information regarding how to create a case-sensitive HFS+ volume, see this article.

Getting the source code through an HTTP proxy

Haiku's main Git repository does not allow HTTP access, which is a problem if you are accessing the Internet through a proxy server that only permits HTTP (port 80) traffic.

Instead, use one of our mirror repositories at GitHub or Gitorious for anonymous HTTP access, they are both kept in sync with the main repository. First, set Git to connect through your proxy server:

Then clone the repositories from GitHub:

Please note that these repositories do not contain any hrev tags, which are used by the Haiku build system to determine the Haiku revision. To work around this limitation, use the HAIKU_REVISION build variable when building Haiku.

If you are already familiar with the pull request workflow as used, for example, at GitHub, you can find an overview of the differences in Gerrit user’s manual. 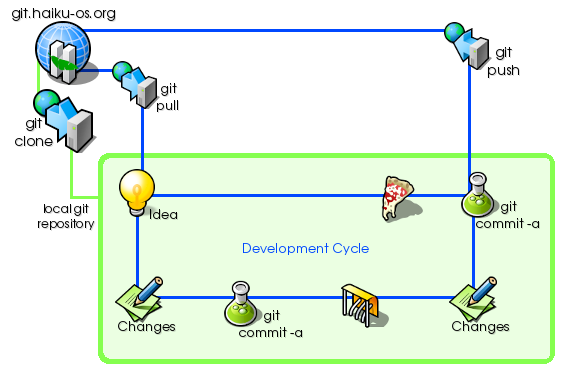 Be sure to use the --rebase argument while doing a pull prior to a push to avoid confusing nonlinear histories! ("Merge 'master' on ssh://git.haiku-os.org/haiku" messages showing your name and others changes) Do NOT however use --rebase on branches you have shared with other people! (rebase re-writes the local history. If your local history doesn't match people who cloned off of you, and they want to push to you, they will have major problems.)

You can make git take care of this automatically for you, so that “git pull” does the right thing for Haiku:

Alternatively, a single path or multiple paths can be given to git pull. This will allow you to run the following command from any directory. This becomes extremely useful if you use an external object directory or if you wish to update both the buildtools and haiku directories at the same time.

In Git, you make commits to your local tree, then push the final results to the central remote Haiku repository. Split your work in not too large commits, but remember that each commit will be reviewed separately, so don’t make them too small either.

The commit message will also be reviewed, and should describe the change in as much detail as possible. You can refer to other commits by either their hrev tag or their SHA1 hash, and to bugs using the #number notation. Gerrit and cgit will then automatically add an hyperlink to the relevant place.

The commit message should include a short description on the first line (ideally less than 64 characters), then a blank line, and a more detailed explanation. The short message is visible in “git log”, the web interface, and many other git tools, and allows to know what the commit is about. The details are available separately (for example in git log -p or when looking at the commit directly in the web interface), so they are both important.

Here is an example of a good commit message:

If your commit is very short, you can include it directly on the Git command line:

If your commit message is longer, you can put it in a file and use it this way:

Alternatively, you can use “git commit -a”, which will open a text editor and let you write down the message when you commit your changes.

It may be a good idea to check Gerrit as a point of reference if you are not sure how you should format your commit message.

After your changes are complete, the push command will push your local tree to the remote Haiku repository. The commits will be added to the review page and people will review them. You can then amend your commits and push them again, until they are reviewed and merged.

It is recommended to set a topic - a single keyword that can easily be searched for in the web interface and help categorize commits.

Taking review comments into account and updating a commit

Usually your changes will not be accepted on the first try. Other developers will review it, making sure they understand what you are doing, and maybe help you find better ways of doing it. They will also check that your code follows the coding guidelines, which are important to make sure the code is easy to read and uses the same conventions in all the codebase.

To update an existing commit, you need to download it locally, modify it, and send it again. When your change consists of a single commit, you can cherry-pick it.

First make sure you start from a clean working tree with the latest Haiku changes (note that this will remove all your work-in-progress commits from the working copy - make sure these commits are in a branch. Git will remind you about this if you haven’t done so).

Then you can download your commit from Gerrit. To do this, use the Gerrit web interface and the Download -> Cherry Pick button, which allows you to copy the required git command. It looks like this, but it is different for each commit and each version of a commit so make sure to get the correct one from Gerrit:

You can now edit the files to make the needed changes. Once you are done, edit the commit to include your changes:

Finally, send your work for review:

The process is similar when your change is split into multiple commits, but you can’t as easily use cherry-pick since it would have to be done once per commit. So, a different process can be used instead.

First of all make sure you have the latest version of the Haiku source code:

Then go to the latest commit of your change in progress and use the Download -> Checkout menu to get all the changes at once. Again, note that the command changes for each commit, so be sure to get the correct one from Gerrit. The one below is only an example.

You can then rebase your changes on the current version of Haiku:

You can use git commit –amend to edit the latest commits and add more commits to the branch. To modify the previous commits, you need to use git interactive rebase (git rebase -i). See

for more help on rebasing.

Once you are done, you can update your patches on Gerrit: