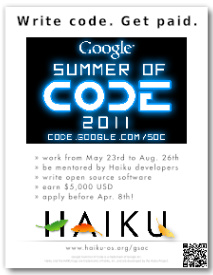 Why does Haiku want to participate?

The Google Summer of Code is a wonderful opportunity for the Haiku Project. It exposes Haiku to many potential youthful and energetic minds that are interested in developing Open Source Software. Even more exciting, it provides a unique opportunity of generating income for the Project while growing a handful of carefully selected students into knowledgeable and potential long-term contributors. As an open source project that develops an operating system, our pool of active committers is relatively small and being able to embrace new contributors is literally a wonderful thing.

As a mentoring organization, we balance selecting impressive students (who display promise of becoming regular contributors) and useful projects (which can be mentored and are appropriate for Haiku).

We strive to nurture our students into talented and motivated open-source developers. This includes being able to communicate effectively on public mailing lists, provide relevant information in bug reports and perhaps most importantly, knowing when to ask for help. Those skills empower them with the confidence and ability to continue making valued contributions to Haiku (or any open source project for that matter).

Current status of the program

The Haiku developers have come up with a list of ideas for students to choose from or to base their proposals on. The candidate students need to start discussing application ideas with Haiku as soon as possible. The application period for students is March 28 to April 8. All student proposals will be matched with a mentor by April 22, and the final list of accepted students and their projects will be announced on April 25 (12 noon US PDT).

Who are the Haiku mentors?

Haiku utilizes a mentor pool, as a compliment to the assigned mentor (and co-mentor) for each student, The mentor pool allows additional people to provide support throughout the Google Summer of Code program. Students who utilize the mentor pool avoid bottlenecks that can happen, when responsibility would otherwise depend on a single person inside a volunteer driven project. This also helps to strenghten the students' ability and comfort with discussions on an open mailing list, which is essential in many remote software development models. Here is a complete list of all Haiku mentors for Google Summer of Code 2011:

How you can help Haiku in Google Summer of Code

Even as a non-mentor, you can help by providing assistance to the students on the mailing list and on the Haiku IRC channel. Making the students feel comfortable with the community is important, as it can help them do a better job at reaching their Google Summer of Code goals, and could also be the key to students staying with the project even after their Google Summer of Code assignment is over.