Opening the door to our conference room I was greeted by 7/10th of our full number this time: the French delegation with Olivier, Jérôme and Adrien; Mark with his trusty 15 year old Toshiba laptop running BeOS and Axel who had to discover that his notebook isn't of that same sturdy quality. Not only did his mouse die (which strangely kept working for a while, but only when used in the middle of his freaky keyboard), but apparently Ubuntu forgot to turn on the fans, resulting in an overheat emergency shutdown...
Andre, treasurer of the Haiku Support Association (HSA) that sponsors and organizes BeGeistert, was also there after having missed the last few meetings. Unfortunately he had to leave already shortly after lunch.

Just before lunch came the rest of the gang: Charlie sweating profusely after an adventurous bike ride including a chain malfunction, and Christian and Lorenz, the BeSly guys from Hamburg. 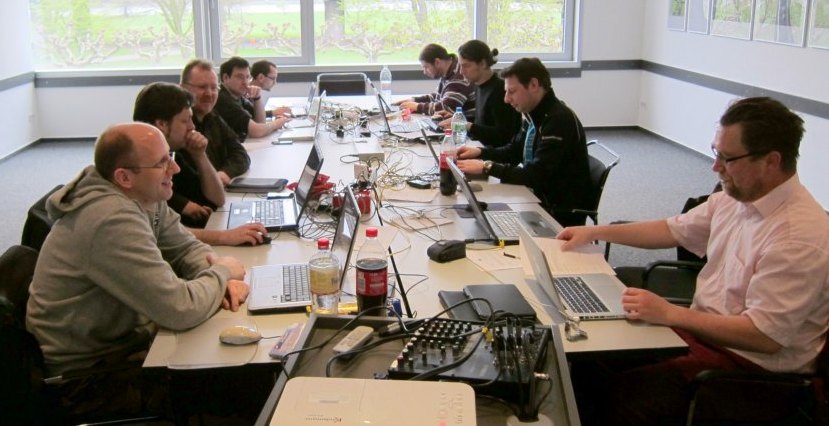 While last BeGeistert (024) saw quite a few talks and demonstrations (though a report of it all sadly failed, other than the videos on package management and the move to git), there was none of that this time. There's hope that with a usually higher number of participants, this will pick up again the next time.
Instead everyone was busy hacking away on their various projects and favorite bugs. In my case, I occasionally disturbed Axel with BFS related KDLs which I hope helped him with the accomplished fixes.

At the same time of BeGeistert 025 the first "Bugfix Weekend" was held in IRC/BeShare. I think it was pretty quiet in those channels, but the contributions that weekend show that not only the BG coders where busy. I just quickly asked around what the people at BeGeistert were working on mainly:

Olivier took a little break from his efforts on "OpenOffice for Kids" and spent most time on the Freepascal port. Recent builds had some problems, especially concerning signal handling. Now a few more tests pass under Haiku.

Jérôme added missing parts for an ARM libroot and investigated how much of glibc is ARM-ready. Turns out it may need a new version, so a look at other options (uClibc, newlib, eglibc) could be worthwhile. He also fixed the es1370 audio driver build.

Adrien patched the USB mass storage driver to get copying files to certain MP3 players working properly. Next were some fixes for the game Critical Mass and the build of the music editor Sawteeth under gcc4. Then he started work on integrating the Game Music Emu (GME) library into APlayer to be able to play back Nintendo, Genesis, and some other chiptune file formats.

Axel was successfully hunting down bugs in the filesystem. One result of his work: checkfs is now able to repair errors in b+trees of indices. I suffered from those myself on various partitions which resulted in visits to the Kernel Debugging Land whenever I tried to build a Haiku image. All gone now, yay! Some of the tickets being affected by this and other bugs in that area were #8408, #7951 and #8069.

Mark was busy improving the rendering engine of the Themis browser. He got the loading of images to work, but currently only for local images (file:// protocol) using the translation kit. Here an old problem of his ancient BeOS R5 system reared its ugly head: crippled by patent issues, there was no GIF translator installed... He still has to do some more testing before committing to the Themis repository.

I did some small optical improvements for UberTuber and tried to lend my meager C++ knowledge to Charlie, who was determined (and with Axel's help successful in the end) to put together a guide on creating "unit tests". Stuff for an upcoming article.

Christian and Lorenz were busily coding and discussing strategies for their yabIDE. All in yab of course, which recently saw a new version released, but could do with some more programmers to speed up its development.

One unusual thing did happen on Saturday evening: We got a visit from a professional photographer. He was to take high quality pictures from our flock of coders (and who else happens to resemble that on a short glance... :)). They're supposed to appear in a Haiku article in IEEE Spectrum Magazine that Ryan is preparing. Nice!
While he and his assistant set up the conference room, we all went to a nearby Spanish restaurant where we enjoyed very nice tapas, beer, wine and what else you'd expect in such a place. 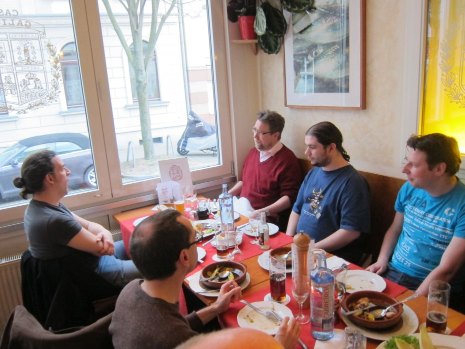 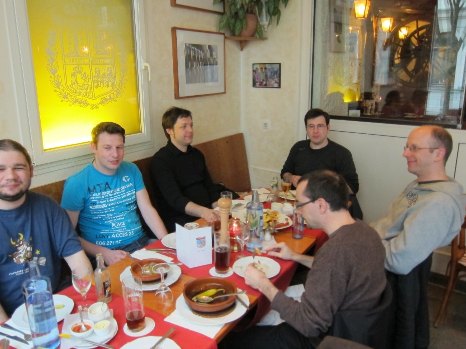 Two hours later we were back, sitting in the now sparsely illuminated conference room while the photographer fired away. Now I know how the other top models feel when they come on a set after stuffing themselves to the brim with Spanish delicatessen...
After the shoot was finished we had a look at the results on the photographer's notebook. Pretty stunning what a 80 megapixel camera can do in the hand of a professional.

Altogether we all had our fun on this BeGeistert even if we missed all our friends that couldn't make it. There definitely was less "buzz" in the air this time. To make the next one live up its usual glory, the date for the next BeGeistert is already fixed, so everyone can mark their calendar: