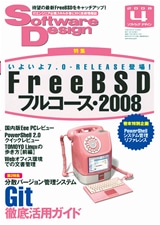 As some of you may know, in the ZETA days I worked for yellowTAB in a consulting capacity. At that time, the market I was involved in was Japan, and as a marcom specialist, I make it a point to develop relationships with representatives of the media of that country in order to gain exposure for the product. Of all, there was one magazine in particular that always showed a lot of interest in our platform, and that was Software Design magazine (SD).

The April 2008 issue of SD carries an article titled "Writing Haiku: Begun in 2001, an open source replication of BeOS finally nears its alpha release" as part of the PACIFIC CONNECTIONS series of articles written by Bart Eisenberg. This is an eight pages long article that includes a full interview of Axel Dörfler, as well as comments from Bryan Varner (Haiku Java Port team lead) and Dane Scott, of TuneTracker fame. I think it is a good read, so go ahead and read the English version of the article available here.