What happens when you combine 337 students, 20+ mentors, and an endless volley of tasks? During the time from November 2016 to January 2017, 368 Haiku tasks were successfully completed. The seventh year of Google’s Code-In, and the seventh for Haiku as a mentoring organization was a grand success.

Students from all around the world aged 13-17 worked with the project mentors on improving Haiku during the 7 weeks of the contest. They coded applications, designed artwork, tested software, and wrote recipes, and more than anything else, had fun.

Out of the 10 students who completed the maximum number of tasks, finalists and grand prize winners were picked collectively by the diligent team of Haiku’s 20+ mentors.

Congratulations finalists! Safe travels, grand winners! We are thankful for your precious contributions and will be delighted see you continue to contribute even after the program. This year Jessica Hamilton will make the trip to meet the winners as they both picked her as the mentor they would like to meet.

Haiku had an impressive growth in the number of students: 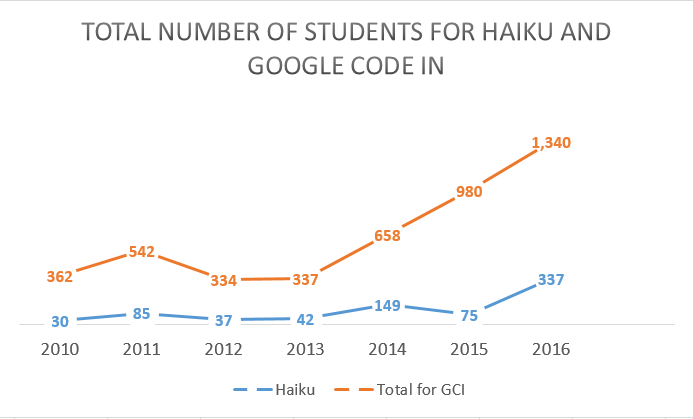 I hope that despite probably being the best of their age in their field, the winning students will stay humble, and hunger for new knowledge.

So congratulations and thanks to all our hardworking students and their mentors, and especially Scott McCreary who once again shouldered the responsibility of administrating Haiku’s GCI participation.

This article was originally published on digib0y’s blog and moved to the News section for posterity.